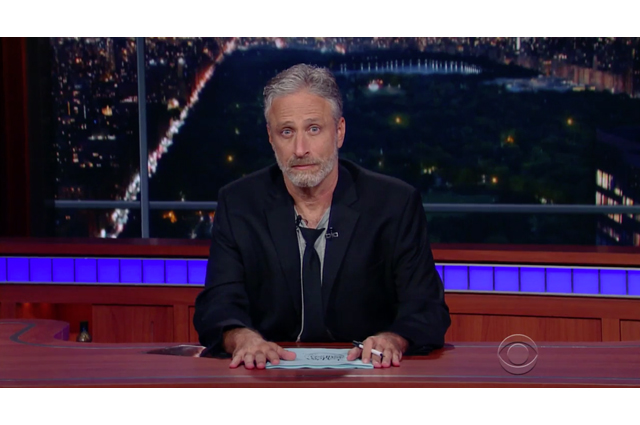 The former host of The Daily Show made a surprise return to late-night TV and targeted Trump supporters.

Almost a year to the day that Jon Stewart abdicated his position at The Daily Show—which he’d built into a bastion of rational thought and order amid the chaos, misinformation and hypocrisy that too often pervades American media (read: FOX News)—the 53-year-old comedian made an unexpected return to late night TV.

Yesterday, Stewart made a surprise appearance on The Late Show with Stephen Colbert, where the host—Stewart’s buddy and former Daily Show correspondent—offered him the spotlight to unleash a fresh dose of comic vitriol on the Republican Party and their most ardent, highly partisan supporters (read: FOX News).

As you see in the video above, draped in an ill-fitting suit jacket with a clip-on tie attached to his grey t-shirt, Stewart took right-wing pundits to task for supporting Donald Trump (who accepted that party’s presidential nomination that same night) even though he embodies all of the qualities those very pundits once declared as negatives against Barack Obama.

“A thin-skinned narcissist with no government experience. Yes. That sounds exactly like…Barack Obama,” Stewart quipped. “So now the right-wing media’s going to have to spend 24 hours a day, seven days a week, justifying this choice they’ve made. Can they make the turn?”

Stewart, channelling his Daily Show persona, rolled a montage of clips of FOX News personality Sean Hannity, whom he called “Lumpy,” giving Trump a pass for the exact same “un-presidential” qualities he called out Obama for. “All that stuff is actually superficial and I’m sure it’s easy for people without ethics or principles to embrace someone who embodies everything that they said they hated about the previous president for the past eight years.”

After more than 10 minutes of riffs that would have been funnier if they weren’t, sadly, so true, Stewart hit his crescendo:

“Trust me, I saw a lot of people on the [Republican] convention floor in Cleveland with their ‘blue lives matter’ rhetoric who either remained silent or actively fought against the 9/11 first responders’ bill reauthorization…You’ve got a problem with those Americans fighting for their place at the table. You’ve got a problem with that because you feel like—what’s Representative Steve King’s word for it?—’subgroups’ of Americans are being divisive. Well, if you have a problem with that, take it up with the founders…Those fighting to be included in the ideal of equality are not being divisive. Those fighting to keep those people out are.”

Is it too late to make Stewart a keynote speaker at the Democratic National Convention next week?