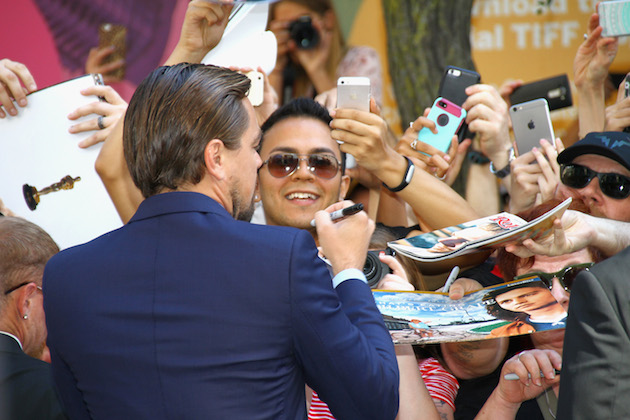 Actor Leonardo DiCaprio attends the "Before The Flood." (Photo by Jeremychanphotography/WireImage)

Is it just me or is this rare photographic proof that Oliver Stone can have a good time? Snapped smiling on the red carpet at the premiere of his latest conspiracy flick, Snowden, the film is based on the true story of Edward Snowden who remains in exile in Russia. The girl on his arm isn’t his daughter or age-inappropriate date, it is one of the film’s stars, Shailene Woodley, who has appeared in numerous hits such as the Divergent series and The Fault in Our Stars.

Who doesn’t love the boyish charm of Joseph Gordon-Levitt? We sure do. So far one of the best groomed men on the red-carpet.

Is this fan ecstatic because she’s taking a selfie with Spock? Or does she mistake Zachary Quinto’s garb for the Joker? The floppy haired, five-o’clock-shadowed actor appears in Snowden but is perhaps best-known for the recent Star Trek reboot.

When your film premieres during daylight hours it’s time to bust out the light suit is it not? American Pastoral’s star and first-time director Ewan McGregor looks fresh and ready to tackle the reviews as his film makes its world debut.

Sure, you’ve already seen Jennifer Connelly on our website talking up her frock. But what about the hair? As smooth and glossy as a mink, her look is modern yet simple to allow the dress to have maximum impact. The make up is minimal too. Actor Leonardo DiCaprio attends the “Before The Flood.”  (Photo by Jeremychanphotography/WireImage)

Where’s hair and make up when you need them? Still you got a love a man who uses this much hair gel. Leonardo Dicaprio smoothes his coif after signing autographs for hoards of eager fans. His appearance on Toronto’s King Street in the middle of the afternoon caused a frenzy but he happily obliged and greeted fans before strutting the red carpet. Leo was in town for the premiere of his environmental documentary, Before The Flood, which he produced. The filmmaker is Fisher Stevens, most recently on The Night Of and who also dated Michelle Pfeiffer for three years.