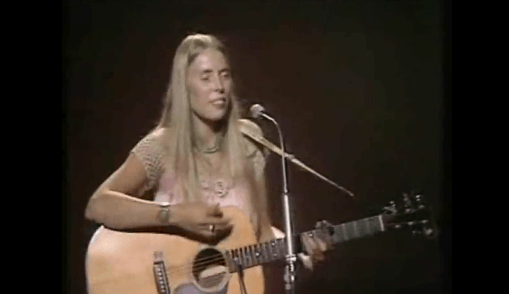 The artist turned 70 this week, but there’s no way you’ll see her on any VHI Diva Live concerts – that’s not her style. Despite her iconic status, the singer-songwriter has never been one to seek the spotlight, which has hardly hampered her success. Mitchell has three Junos, eight Grammys as well as a Grammy Lifetime Achievement Award under her belt. She’s a Companion of the Order of Canada, has been inducted into the Rock and Roll Hall of Fame, the Canadian Music Hall of Fame, the Canadian Songwriters Hall of Fame and received an honorary doctorate in music from McGill University. Heck, she’s even been on a Canada Post stamp!

She writes, sings, plays, paints and is credited as sole producer for most of her albums, and it all started in small-town Canada. Roberta Joan Anderson (she goes by her first husband, American folk-singer Chuck Mitchell’s surname) spent her youth between Saskatchewan and Alberta before dropping out of the Alberta College of Art and Design to pursue music and try her luck busking and playing anywhere she could in Toronto. She ventured south of the border, meeting Mitchell while performing in Michigan. The couple toured U.S. coffee houses and nightclubs in the early ’60s until David Crosby (of Crosby, Stills & Nash and sometimes Young fame) discovered her at a club in Florida and convinced a record company in Los Angeles to sign her. Well, you know what they say about the rest being history – her story in this case.

Forty-one years and 19 albums later, Mitchell splits her time between L.A. and Sechelt, B.C. These days, she focuses on her other creative outlet – painting, with which she’s created album cover artwork throughout her career. Perhaps telling of her character, Mitchell doesn’t sell her creations, reportedly painting just for herself. She may keep her personal life to herself, but Mitchell doesn’t shy away when it comes to being an environmental and political advocate and voicing her criticism of the very industry that made her a legend, abandoning tradition to release her last record through Starbucks’ Hear Music label. And the tributes keep rolling in, from Herbie Hancock’s Grammy Award winning 2007 album River: The Joni Letters to Katherine Monk’s new biography Joni: The Creative Odyssey of Joni Mitchell or a birthday tribute concert being held today in Arcata, Calif., and all with no self-promotion. That’s just her style.