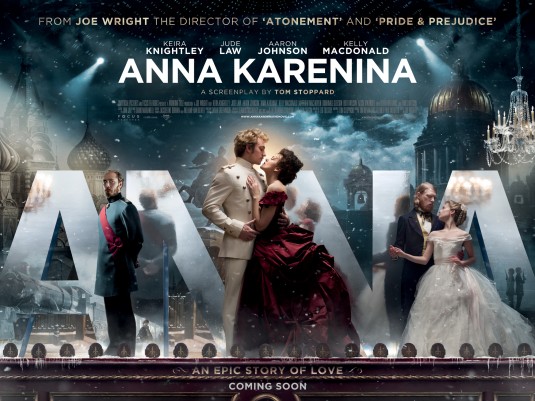 Choice Quote: Countess Vronskaya: Ah, love. My sons are ashamed of me but I’d  rather end up wishing I hadn’t than wishing I had. Wouldn’t you?

What’s it about?: The classic story set in Imperial Russia centres on Anna Karenina – restless wife of the revered Count Karenin – who travels to Moscow to help her philandering brother Prince Oblonsky repair his marriage to Princess Dolly. While there, she catches the eye of Count Vronsky, “a rich, good-looking Calvary officer” who, we quickly learn, doesn’t take “no” for an answer. The two play a public game of cat and mouse en route to a full-blown affair, while the humble Konstantin Levin pursues the hand of Oblonsky’s sister-in-law Princess “Kitty.” Love, lust, tragedy, and dancing, ensue.

Is it any good?: What we have here is a tale of two Anna’s. First and foremost, there’s Leo Tolstoy’s Anna, the title character of what many literary heavyweights consider the greatest book of all time – a work that prompted its author to reportedly admit, “I wrote everything into Anna Karenina, and nothing was left over.” And then we have Joe Wright’s Anna – a story that resembles Tolstoy’s save for the variances in story and a noted toning down of emotional depth (though it’s exponentially superior to Tolstoy when it comes to clever camera tricks).

Playwright Sir Tom Stoppard, of Rosencrantz and Guildenstern Are Dead fame, whose 1998 script for Shakespeare in Love snagged an Academy Award, penned the film. His take on Anna Karenina, however, leans literally toward his theatrical roots.

A sizable portion of the movie takes place in a dilapidated Russian theatre – a clever context in which to frame the film while saving producers from a logistical and budgeting nightmare. The sets shift as if on stage. Walls are moved to signify scene changes. Skylines are painted onto backdrops. The elite Russian upper crust inhabit the stage and floor while the peasants rattle around the rafters like rats in an attic. Entrances and exits are choreographed to ease the pesky task of adapting an 800-plus-page novel into a two-hour film. It works brilliantly at times but at others comes off as too campy for such a weighty story.

For example, the choreography of the dance dual early on between Anna and Kitty for Vronsky’s affections, and the aforementioned division of classes between the stage and rafters, both prove effective in moving the story along. However, the actors in tableau as Anna walks past or the toy train racing across a model set, induce eye rolls. And do we really need “the wink-wink, nudge-nudge” image of a locomotive barreling toward Anna’s reflection in a mirror as she considers her affair?

As Anna, Knightley cries, laughs, screams and breaks down, but there’s a depth to the character that she fails to capture. Add to this the fact that she looks younger than Tolstoy’s Anna is thought to be. Along with Aaron Taylor-Johnson’s Count Vronsky, the two make for a bratty, selfish pairing. Sure, we’d all like to sympathize with the young woman who married too young and foolishly bound herself to a man who does not interest her. Anna, however, is dismissive and cold toward a husband who initially only wants to forgive and forget her indiscretions, while Vronsky’s like a lustful teenager dressed in his best suit attempting to win over the prom queen. Law, conversely, plays Anna’s slighted spouse to monastic perfection. Yes, he schedules intimacy as if it’s yet another government meeting he’s obligated to attend, but for all his stuffiness he’s still more sympathetic than the other two.

Matthew Macfadyen, who served as Wright’s Mr. Darcy in Pride and Prejudice, shines as Anna’s adulterous – though entertaining – brother Prince Oblonsky, while Kelly Macdonald shows off superb range as his wronged wife Dolly. The film could use more of her.

One of the most blatant differences between the novel and the film is that in Tolstoy’s Anna, the slow-to-blossom romance between the idealistic Levin and his sweetheart Princess Kitty shares almost equal time with the tale of Anna and Vronsky. In Wright’s Anna, however, their love story is portrayed more as intermittent breaks between acts in the main affair. It’s too bad, considering Gleeson’s Levin (a character generally believed to be modeled after Tolstoy himself) and Vikander’s Kitty make a sincerely loveable and heartwarming pair.

The visuals in this film are second to none. Aside from the fantastic special effects, Wright’s P&P costume designer (Jacqueline Durran) and production designer (Sarah Greenwood) deserve a major nod for their work here. As well, to round out the P&P alumni roster, Dario Marianelli’s music beautifully underscores the pageantry of the production.

All in all, Anna Karenina will likely prove one of the most divisive films of the year. Some will call for awards all around while others will decry the glossy Hollywood touches that dumb down the classic story. The important thing, really, is to see Anna Karenina and judge for yourself. Just keep in mind that this is Wright’s Anna, not Tolstoy’s. It’ll be up to you to decide whether or not that’s a good thing.

Can I bring my kinds and grandkids to see it?: If they’re at least in their teen years, they’ll love the visuals and theatrics, if not the story.