Is Grandparenting Better Than Parenting? 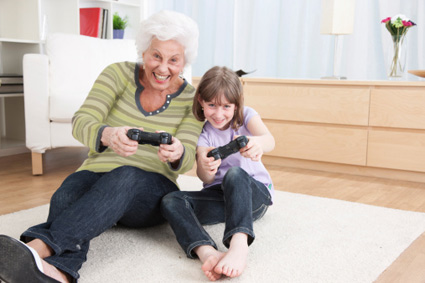 Most of us would answer yes to that question. There are lots of reasons for enjoying the role of grandparent more than that of a parent. First of all, we aren’t ultimately responsible for how the grandkids turn out. Secondly, we have more leisure time to spend in happy pursuits with our grandchildren. Not only that, there’s a limit to the time we spend with them. They go home or we go home and get to enjoy our own activities. And finally, there is that incomparable knowledge that grandchildren are a new generation, part of the family chain we’ve created. Talk about genetic pride and joy!

A study conducted in Singapore reveals that people who have children are not happier than people who don’t have children. But a British survey of grandparents and non-grandparents shows that in terms of what makes older people happy and satisfied with their lives, those with grandchildren had a greater satisfaction with life than those who did not have grandkids.

Morris and Catharine of Port Moody, B.C. concur with these study results. “I was so stressed as a young mom,” Catharine says. “I have to say I cannot remember loving the experience of being a parent. Maybe there was just too much worry about their health, safety and how well they would do in school. I always felt I was checking my watch all the time and looking forward to when they would all be in bed.” Morris agrees. “We seemed to do everything we were supposed to, but I remember those early morning treks to the hockey rink, the temper tantrums, the stress of getting the homework done,” he says. “Sure, there were lots of happy times, but most of the time being a parent was really hard work and felt like an uphill battle.” Generally, Morris and Catharine summed up their life as parents as a time of guilt, panic and anxiety.

With grandkids, we don’t have to take them to the hockey rink or make sure their homework is done. We get to do what we like to do with grandchildren. That may mean taking them to the rink or helping with homework, but we do it because we want to, not because it’s our duty.

The other benefit to being a grandparent is that we get to redo the mistakes we made as parents. It’s a second chance to get it right. We do have to follow the parenting guidelines set out by the children’s parents, but even with the rules, there’s enormous joy and satisfaction in our interaction with grandchildren.

Of course, it’s important that we don’t make the same mistakes with grandchildren that we made as parents. Wanda of Minden Ontario rolls her eyes in response to this. “I thought I’d make up for wrecking my own kids once I had two grandchildren,” she says. “But I make the same mistakes. When I ask my grandchildren to clear the table after dinner and teach them responsibility, I end up doing it myself because it’s easier than nagging. I did the same thing with my kids. The problem is I’m the same person, easygoing and the same servant to my grandkids as I was to my kids.”

Morris and Catharine feel they have a completely different role as grandparents from their previous job as parents. “While we found parenting a tough drudgery without a lot of fun, we’ve made sure that doesn’t happen with our grandchildren,” says Morris. “We actually make sure that our interaction with them is fun. I wish we’d had the same fun when we were parenting, but our kids turned out okay, so I guess it doesn’t matter.” Catharine says they have a different attitude now. “We don’t have the same responsibility with the grandchildren, so even though we help out taking them to their weekend activities, we don’t regard it as a chore. We always make it a fun occasion,” she says. “Besides, we can drop them off at the end of the day and go home to our own space.”

Maybe the best reason to have kids is that it means having grandchildren down the road.