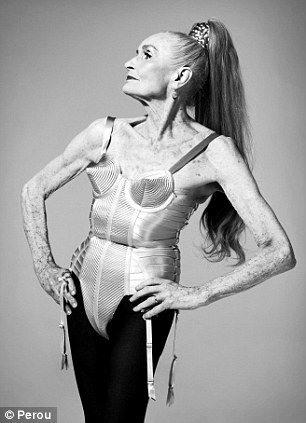 Madonna, the Queen of Pop, who is also well known for her ability to defy aging with her strict diet, ample Botox and gruelling workout regimen, is being honoured by non other than 83-year-old model Daphne Selfe, who embraces her age and wears the wrinkles on her face proudly.

Selfe agreed to pose as Madonna in her prime, wearing a replica of the infamous conical bra and corset made by Jean Paul Gaultier for the singer’s Blonde Ambition tour in 1990.

The brave model told the Daily Mail the replica is “terribly unforgiving. I thought they might have done a bit of airbrushing!” And,  “I’m not that brave. I used to pose nude, you know, for artists including Barbara Hepworth.”

The octogenarian did not do the shoot for nothing. It is for a cause called Oxfam’s Big Bra Hunt which sends bras to Senegal, West Africa, to woman in need. The head of Oxfam Trading, Sarah Farquhar, said, “A good bra makes them feel more elegant.”