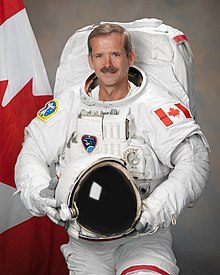 He has spent most of this year training for this career-defining moment: in December 2012, the Canadian astronaut from Sarnia, Ont., will lift off aboard the Russian spaceship Soyuz, en route to the International Space Station, becoming the first Canuck ever to command a spaceship.

Hadfield has been to the heavens before: in 1995, he was a crew member of the space shuttle Atlantis and in 2001, he flew aboard Endeavour, where he became the first Canadian to participate in a space walk. So how does Hadfield plan to spend his leisure time in space? By playing guitar, of course. “If you can imagine floating weightless, watching the world pour by through the big bay window of the space station, playing a guitar – just a tremendous place to think about where we are in history.”