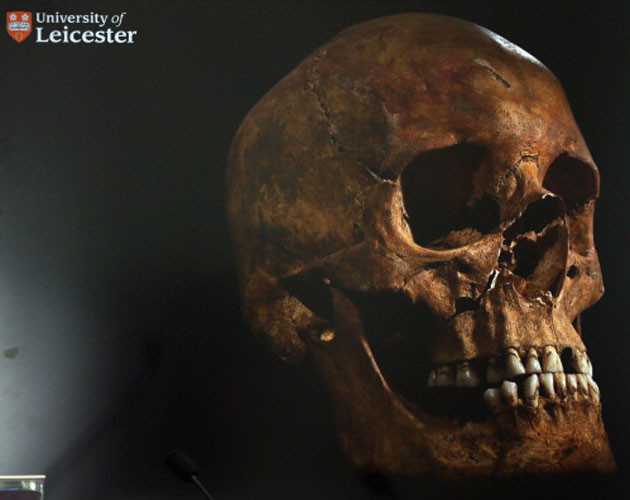 Who’d ever think that the man who lives next door to your Toronto home is actually related to one of the most notorious kings of Britain? Then again, who’d ever believe that the remains of said king were buried beneath an English parking lot? It’s been a strange and eventful day for science, to say the least.

The first big news of the day revealed that the remains of King Richard III – he of murderous, hunchbacked, Shakespearean fame – have been found beneath a parking lot in Leicester, England, evidently dumped there unceremoniously by Henry Tudor’s army after coming out on the wrong end of the Battle of Bosworth Field in August 1485.

The king’s body was found beneath the parking lot last August, ending five centuries of mystery and a good number of years of parallel parking.

A team from the University of Leicester found the missing monarch after careful research into probable resting places and a technique known as “map regression analysis” – essentially working backward from current maps to older ones, noting the changes in the area and hypothesizing where the king may lay.

It was a Canadian, however, who helped crack the case. Michael Ibsen, a Canuck carpenter living across the pond, possesses mitochondrial DNA that’s “a distant match to Richard III’s sister.” The Toronto Star reports that Ibsen’s mom, Joy, “was contacted before her death about a decade ago and was told she appeared to be in an all-female line of descent from one of Richard III’s sisters.” Now, 10 years later, her son’s DNA offered conclusive evidence that the remains are indeed Richard’s. For the record, that makes Ibsen, his Toronto-based brother, Jeff, and a Vancouver Island-dwelling sister the “17th great-grand-nephew (/niece) of Richard’s older sister.”

“The geneticists and I, we’d been in the room with the remains of Richard III, which would be extraordinary under any circumstances, but to stand there and realize you have a tangible connection with this king of England, it does play with your mind a bit,” Ibsen said in an interview with CP24. “I don’t think enough research has been done into his life before he was king, which I think might be an interesting consequence of the announcement today.”

According to the Toronto Sun, 10 per cent of Canadians likely have a royal leaf somewhere in their family tree. As well, King Richard aficionados do hope the discovery spurs a makeover of the monarch’s less than kind reputation.

There are some, however, who likely won’t be convinced – the poor folks forced to find parking on the busy Leicester streets. For them, King Richard III’s tyranny just won’t end.