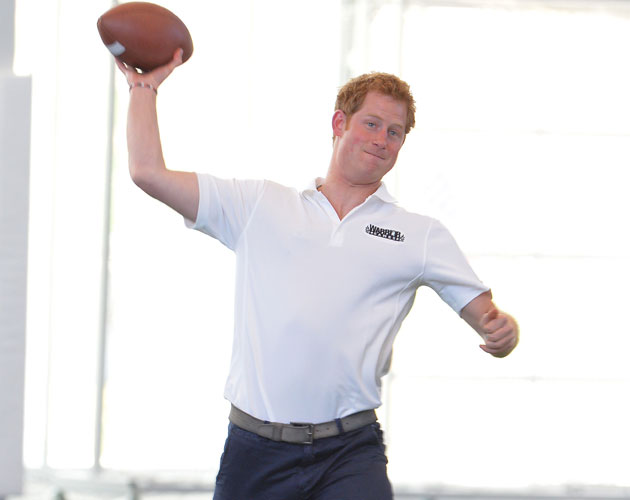 Britain’s Prince Harry tried his hand at American football over the weekend.

The 28-year-old royal took to the field at the US Air Force Training Academy in Colorado Springs yesterday (12.05.13) to join in with the team’s daily practice, picking up tips along the way after growing up more accustomed to the British method of playing.

Harry was joined by coach Troy Calhoun, who described the prince as “a natural” as he tossed the ball to fellow players, and he was even presented with a team shirt emblazoned with ‘Wales’ on the back, after his military title of Captain Wales.

After enjoying the game, the third-in-line to the throne finished his visit by helping cheerleaders in building a human pyramid, which was topped by the USAD Falcons team mascot – a man dressed as a bird.

Harry’s sporty stop follows his attendance to the opening of the 2013 Warrior Games on Saturday (11.05.13), where he took part in the torch-lighting ceremony to kick start the events.

The prince revealed he would love to bring the games – which are staged for injured servicemen and women – to his home nation as he believes it would attract huge crowds.

He said: “I only hope in the future, the near future we can bring the Warrior Games to Britain and continue to enlarge this fantastic cause.

“I don’t see how it wouldn’t be possible to fill a stadium with 80,000 people, not to watch Olympics, not to watch Paralympics but to watch wounded servicemen fight it out amongst each other – not on a battlefield but in a stadium.”