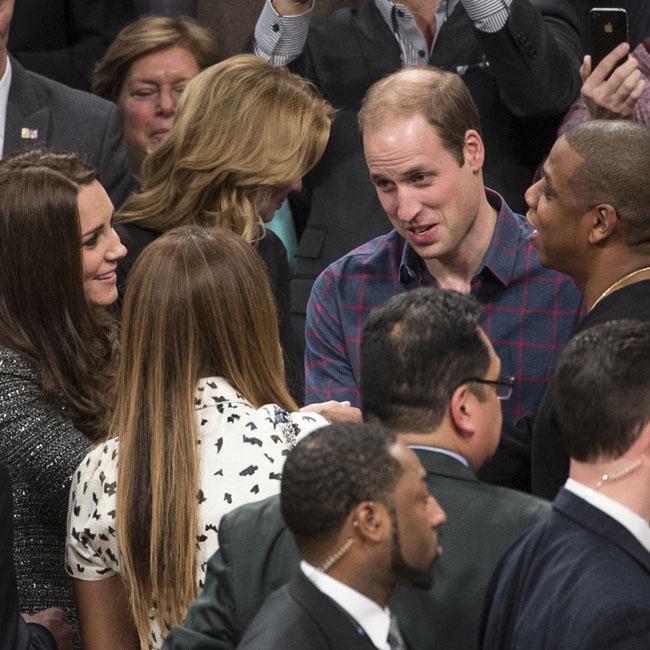 Britain’s Duke and Duchess of Cambridge caused a “mob scene” when they met up with Beyonce Knowles and Jay Z.
The royal couple, both 32, were introduced to the ‘Single Ladies’ pop star and her rapper husband at the Cleveland Cavaliers v Brooklyn Nets basketball game at the Barclays Centre in New York last night (08.12.14).
Recalling the moment Beyonce, 33, and Jay Z, 45, met Their Royal Highnesses, a source shared: “Bey and Jay got up out of their seats during the break before the fourth quarter and walked across the court to say hi.
“Everyone was standing up and gawking. It’s a mob scene around them.”
Despite the attention, Prince William and Catherine, Duchess of Cambridge appeared to enjoy their time at the match, even when they were broadcast on the court’s big screen.
The insider told E! News: “During the time-out, they put them on the Jumbotron. Everyone cheered, but they seemed kind of shy. They smiled and waved. It was cute.
“[William was ] definitely explaining the game to [Catherine]. He’s pointing things out and she’s nodding a lot.”
The second-in-line to the throne even joked about his basketball skills, much to the amusement of his wife.
Posing with a ball ahead of the game, the duke said: “This is where I should be spinning it on my finger.”
As Catherine quipped: “You are going to pretend you can actually score.”