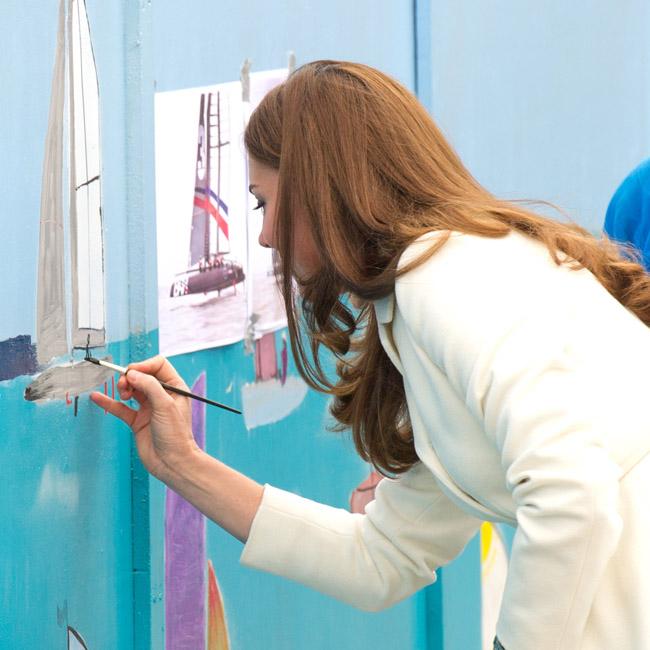 Britain’s Duchess Catherine likes painting with Prince George.
The 33-year-old royal – who is expecting her second child with husband Prince William – helped decorate a mural at the Portsmouth headquarters of the Ben Ainslie Racing Visitor centre yesterday (12.02.15) and revealed her 18-month-old son has already inherited her love of art.
Art teacher James Waterfield from Park Community School in Leigh Park, Havant, said: “I was so worried about getting paint on her fantastic white coat.
“She told me she was painting yesterday with baby George and she should have brought him down because he loves doing all of this.”
Catherine also stopped to chat to construction workers still working on the facility, which is hoped to open in May, and was presented with special hi-visibility vests printed with the words ‘The Boss’ for her, ‘The Future Boss’ for George and ‘The Boss’s Best Friend’ for her beloved pet dog Lupo.
Project Planner Clare Logan said: “I was just telling her about my role which is the coordination of everything that needs to be done on site.
“The programme is pretty critical, it’s pretty intense.
“I gave Kate the hi-vis vests as a gift – one for her which said The Boss, one for George which said The Future Boss and one for their little dog which said The Boss’s Best Friend.
“William didn’t get one.”
William was likely to be unimpressed at missing out on a gift, and later in the day Catherine admitted her husband – who famously supports soccer team Aston Villa – would be “very annoyed” after she was presented with a Portsmouth FC top for George by school pupils during a visit to the 170-metre tall Spinnaker Tower.
Lucy Burroughs, head girl of Mayfield School who gave her the gift, said: “She said William would be very annoyed because he’s a massive Villa fan.”
Inside the tower, Catherine was able to get a good view of the racecourse for the America’s Cup World Series event and tried her hand at a power grinder, a hand-operated device for winding in sails.
Sailing legend Sir Ben Ainslie said: “It was great to have her here and she was looking well.
“She’s very interested in everything. She was really interested in how we are designing the boats and in the most secretive parts of that.
“There are a lot of very smart people working very hard on that.”