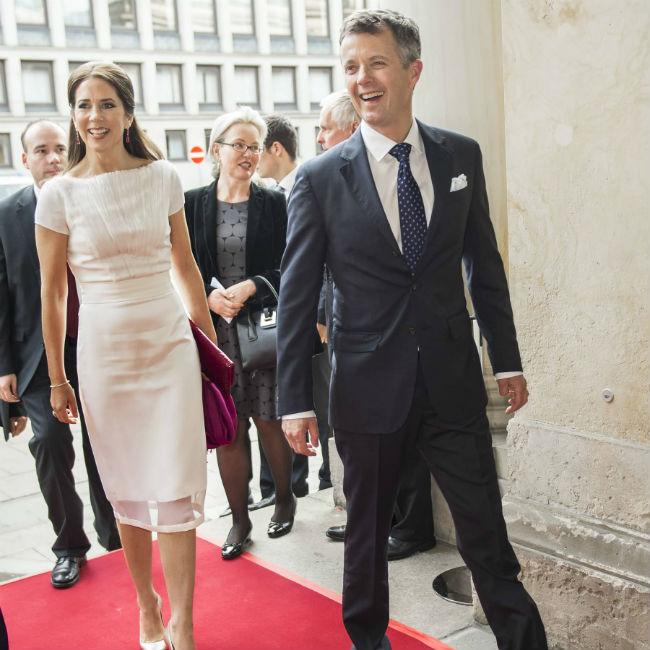 Princess Mary and Prince Frederik have completed their three-day visit of Germany.
The Danish royal couple – who celebrated their 11th wedding anniversary last week – have been touring the European country in order to promote Danish-German trade relations, and have continuously been pictured looking loved up and laughing together while attending various events.
The 46-year-old prince was pictured pulling his beaming 43-year-old wife in for a kiss as the couple browsed furniture at a store in Munich yesterday (21.05.15).
It wasn’t just her husband that was awe-stricken by Princess Mary as she took the time to chat to a handful of curtsying young girls this week too, while receiving bouquets from them.
The previous day saw tons of fans stood in the pouring rain to greet the princess, and Mary was pictured shaking hands with the girls in the rain, before the couple attended the opening of a new Georg Jensen boutique.
Later in the day, the couple were covered by umbrellas as they made their way into the Munich Residence, the city’s former Royal palace, for a dinner.
The couple had been sampling the tastes of Germany throughout their trip, and attended a food event at the Silent Fusion Kitschen at the Hotel Scandic Emporio on Tuesday (19.05.15), where Princess Mary proved her skills in the kitchen by participating in a cooking demonstration on stage in front of the crowd, assisted by chef Thorsten Schmidt, while Prince Frederik cheered her on from the audience.