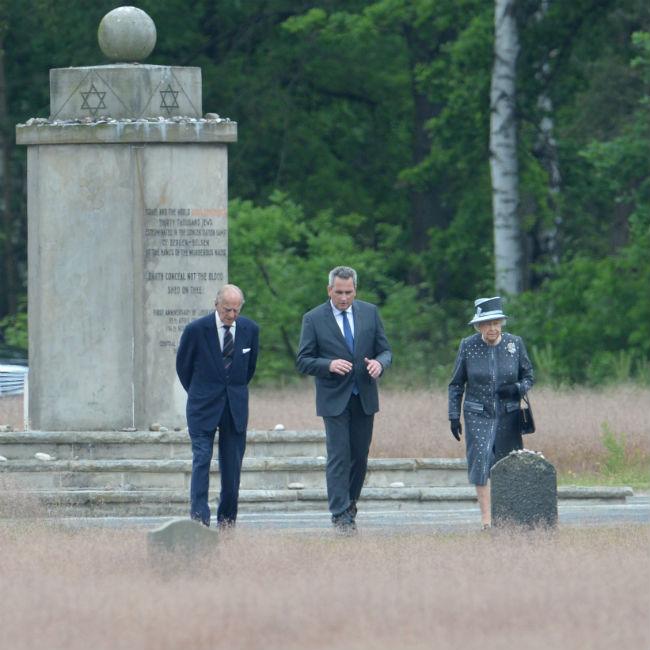 Britain’s Queen Elizabeth has met survivors and liberators of Bergen-Belsen.
The 89-year-old monarch and her husband Prince Philip – both of whom have travelled to Germany on an official state visit – spent time at the former Nazi concentration camp, where the Queen laid a wreath at a memorial to the 70,000 Jews, Russians and other prisoners.
They were met at the camp by Captain Eric ‘Winkle’ Brown, who helped liberate the site and he recalled: “It was utterly, utterly horrific. Firstly there were 10,000 bodies littered around, and the worst thing to me was that the [survivors] had been dehumanised. They were like animals because they would urinate and defecate wherever they were. They had lost all dignity, they were dying, none of them looked as if they would live.
“Some of the bodies had been thrown into open graves but most were just lying around. There were pits 10ft deep which had bodies piled 10ft high in them, mostly women. There were bodies literally everywhere.”
Captain Brown has returned several times since and he still finds it an intense experience.
He told the Daily Telegraph newspaper: “The thing that always strikes me is that when you get here, there is a clammy feeling, it almost envelops you. There’s not a bird in sight – and you’re in a forest – the birds have abandoned it and there is the pall of death everywhere.
“I still wake up the odd morning and the stench of Belsen is in my nostrils. It’s the stench that stays with me. God that smell was fearsome.”