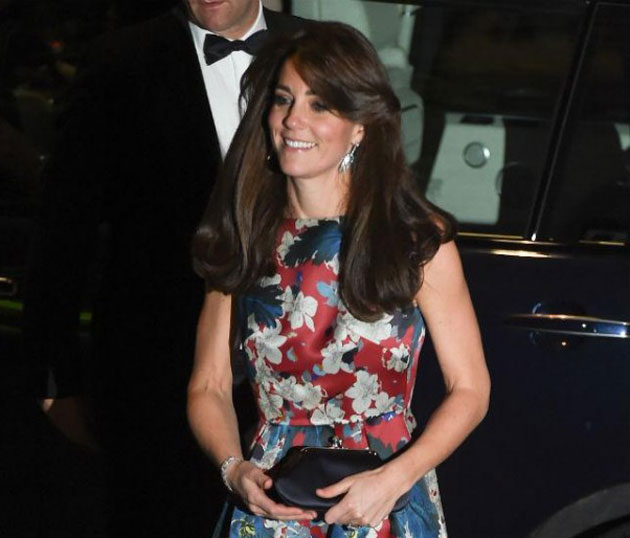 Duchess Catherine wowed in a flowing Erdem gown in London on Tuesday (27.10.15) night.
The royal attended the 100 Women in Hedge Funds (100WHF) Gala at London’s Victoria and Albert Museum and caused quite a stir in her red, white and blue floral gown.
Catherine attended the event to support The Art Room, a charity of which she is a patron. All proceeds from the evening will be donated to the charity.
It’s been a busy week for Catherine, who has undertaken a number of royal engagements so far.
On Monday (26.10.15), she visited the British Academy of Film and Television Arts (BAFTA), during a meeting of the Charities Forum with her husband Prince William and brother-in-law Prince Harry.
And later that evening, the trio attended the ‘SPECTRE’ premiere at London’s Royal Albert Hall, where they mingled with the stars of the latest film in the spy franchise, including Daniel Craig, Monica Bellucci and Lea Seydoux.
Catherine wowed in a stunning semi-sheer gown designed by Jenny Packham.
They arrived at the premiere in a chauffeur driven Bentley and were met by the producers of ‘SPECTRE’, Barbara Broccoli and Michael Wilson, and director Sam Mendes.