Trudeau Brings the Boom to Obamas, Prince Harry & the Queen 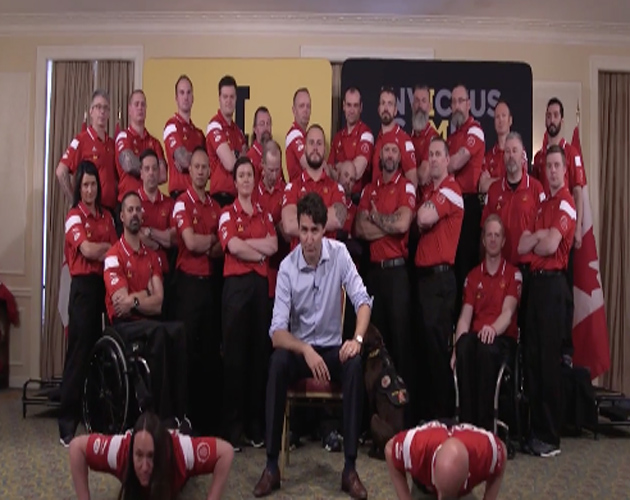 Prime Minister Justin Trudeau brought Canada into the social media tussle between the Obamas, Prince Harry and the Queen with a brand new video. Did someone say “bring it?”

Dear @POTUS, @FLOTUS and @KensingtonRoyal – did someone say "bring it?" Canada's ready for @InvictusOrlando.https://t.co/TxBAMPvTYs

A social media exchange between the White House and Kensington Palace last week is shaping up to be the most memorable slight between the Americans and the Brits since the Boston Tea Party. This time, however, it’s our friends across the pond with the upper hand.

The fireworks began when First Lady Michelle Obama recruited her husband, President Barack Obama, along with three members of the armed forces, for a video challenge directed at Prince Harry ahead of the upcoming Invictus Games (May 8-12) – an international event that sees wounded or ill servicemen and women compete in various sporting competitions — founded by the Prince himself. Prince Harry will also be in Toronto this coming Monday to officially announce that the Invictus Games will take place here in 2017.

“Hey, Prince Harry, remember when you told us to ‘bring it’ at the Invictus Games?” the First Lady asks in the video, which you can watch below.

“Be careful what you wish for,” the President warns, before a serviceman in the background mimes “dropping the mic” and exclaims, “Boom.”

Hey, @KensingtonRoyal! Are you ready for @InvictusOrlando? Game on. pic.twitter.com/S34KrEv5Is

In centuries past, such a challenge lobbed at Buckingham Palace would have less affable monarchs bellowing, “Off with their heads!” Instead, a few hours later, after a pair of tweets referencing the Obama video in which the Royals ask the President and First Lady, “You can dish it out, but can you take it?”, Kensington Palace responded with their own video tweet featuring Prince Harry and THE QUEEN herself. The rebuttal shows the Royals watching the Obama video, to which the Queen responds, WITH A DISMISSIVE CHUCKLE, “Oh really, please.” Then Prince Harry grins at the camera and makes the same “mic drop” motion before offering his own, mocking “Boom.”

Unfortunately for you @FLOTUS and @POTUS I wasn’t alone when you sent me that video 😉 – H.https://t.co/sjfSQvkzb6

To say that it’s entertaining to see the 90-year-old monarch take part in a Twitter “beef” is an understatement. Not only does the Queen possess elegance and style, but it’s great to see that her sense of humour, as well, has only grown better with age.