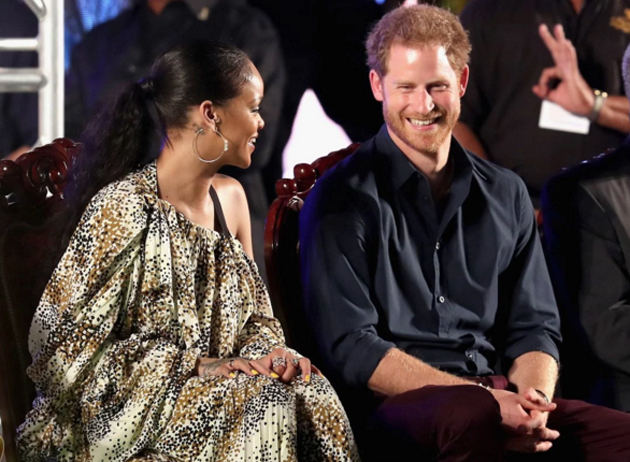 Rihanna met Prince Harry on Wednesday (30.11.16) during his trip to Barbados.

The 28-year-old R&B superstar, who is from the Caribbean island, was a special guest at the Toast the Nation event, which was put on to mark the 50th anniversary since the country gained independence.

According to a royal aide, the 32-year-old royal was only told 20 minutes prior to meeting the ‘Work’ hitmaker that he would be introduced to her.

He said: “We thought he would be meeting her for the first time at the concert later. He found out just before arriving. About 20 minutes before, that she would be here and sitting near his table.

“I think because all the timings have been changed around due to the bad weather, there is a certain degree of fluidity in the arrangements.”

The flame-haired hunk only spoke briefly with the Bajan beauty.

He shook her hand, and said: “Hello, it’s very nice to meet you.”

Later in the evening, Rihanna and Harry shared a stage at the Kensington Oval cricket ground in nearby Bridgetown.

The pop star sang to a 20,000 strong crowd to mark the nation’s independence milestone and was tasked with performing the Barbados national anthem with a children’s choir.

Harry had to read a speech on behalf of his grandmother, Queen Elizabeth, who he is covering for on his 15-day tour of the Caribbean.

He read: “Prince Philip and I send our warmest wishes to the Government and the people of Barbados on the occasion of your 50th Anniversary of Independence.

“Since you became an independent country in 1966, you have continued to flourish and grow into a strong and confident nation.

“The extraordinary talents of your people, from the cricket field to the music industry have been admired and recognised throughout the world. Barbados remains a favoured holiday destination for British people, not only for the incredible natural beauty of your country but because you have a great warmth and generosity of spirit.

“Over the years I have visited Barbados five times and you have kindly welcomed many other members of my family.

“Our countries have a shared history, shared values and an affection which continues to bind us in friendship. On this day of celebration, I send my congratulations to you on your Golden Jubilee of Independence.”