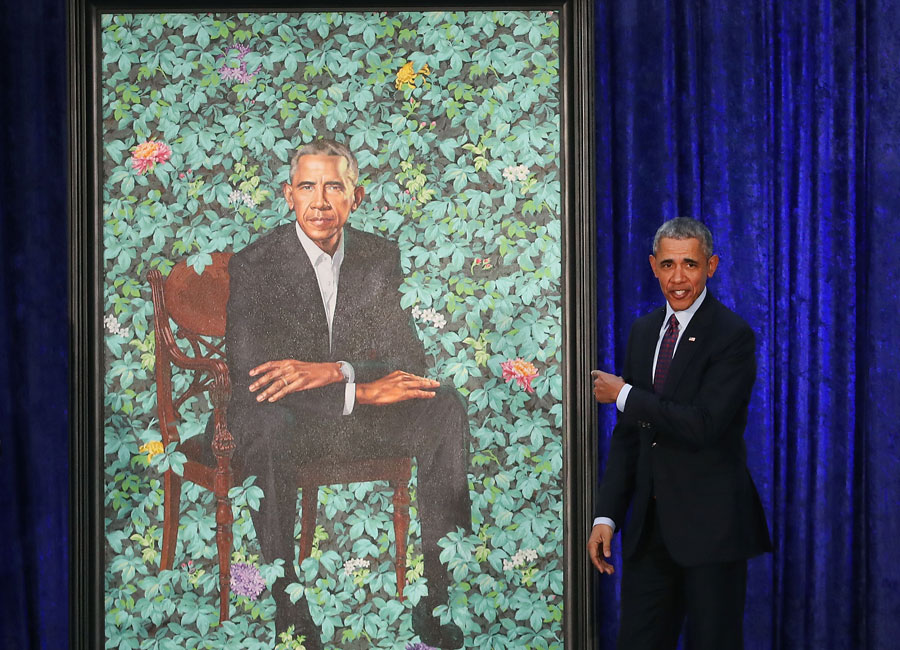 Former U.S. President Barack Obama stands next to his newly unveiled portrait during a ceremony at the Smithsonian's National Portrait Gallery, on February 12, 2018 in Washington, DC. Photo: Mark Wilson/Getty Images.

The Smithsonian National Portrait Gallery unveiled official portraits of former U.S. President Barack Obama and his wife, Michelle Obama, earlier this morning in Washington, D.C., with the couple on hand to witness the unveiling.

“I’ve never had any portrait done let alone a portrait that will be hanging in the National Gallery,” Michelle Obama, 54, noted in a speech at the event. Upon viewing her portrait – painted by Baltimore artist Amy Sherald, “who typically paints life-size portraits of black Americans … with gray skin as a way to ‘subversively comment about race without feeling as though I’m excluding the viewer’” – the former First Lady paid homage to those whose sacrifices inspired her success.

She also spoke of the future, referencing, “the young girls who, in the years ahead … will come here and see someone who looks like them hanging on the wall of this great institution. And I know what kind of impact that will have on their lives, because I was one of those girls.”

The former president, meanwhile, took a more light-hearted tone in his speech, following the unveiling of his portrait, by New York artist Kehinde Wiley, who’s known for melding classical artistry with eye-catching tones in depicting people of colour. The 56-year-old’s portrait shows him sitting against a backdrop of various flowers and foliage, all of which hold significant meaning – jasmine, honouring his Hawaiian birthplace; African blue lilies, to recognize his father, Barack Obama Sr., who was born in Kenya and died in a car accident when his son was only 21; and Chicago’s official flower, the chrysanthemum, representing the city where Obama undertook some of his earliest public service initiatives before rising to become a senator representing Illinois.

“I tried to negotiate less gray hair and Kehinde’s artistic integrity would not allow (him) to do what I asked,” Obama quipped, after complimenting the portrait. “I tried to negotiate smaller ears. Struck out on that as well.” He also offered words of gratitude to Sherald, for her portrait of Michelle Obama. “Amy, I want to thank you for so spectacularly capturing the grace and beauty and the intelligence and charm and hotness of the woman that I love.” He added that his own portrait artist was “working at a disadvantage because his subject was less becoming. Not as fly.”

A number of notable guests were on hand to witness the unveiling, including producer and screenwriter Shonda Rhimes, director Steven Spielberg, actor Tom Hanks and members of President Obama’s White House staff. The Obamas chose the artists who painted the portraits and both works will permanently join the National Portrait Gallery, with Barack Obama’s joining the “America’s Presidents” exhibit and Michelle Obama’s finding a separate spot in the institution. The portraits, however, have already found a home on social media, where they were greeted mostly with enthusiasm, if not some humour as well…

Monday morning joy as portraits of President and First Lady Obama are revealed by artists Amy Sherald and Kehinde Wiley. Reminds me to hope. #ObamaPortraits pic.twitter.com/6r4NtH0rxx

Can we talk about how stunningly powerful it is to see a black man in a garden the way Kehinde Wiley painted Barack Obama?! It dismantles so much and creates new visions of masculinity that black men rarely have the public permission to explore. pic.twitter.com/pwycHtbbDX

I like the Obama portrait a lot, but will admit my first thought was: “Why is he sitting by the outfield wall in Wrigley?”