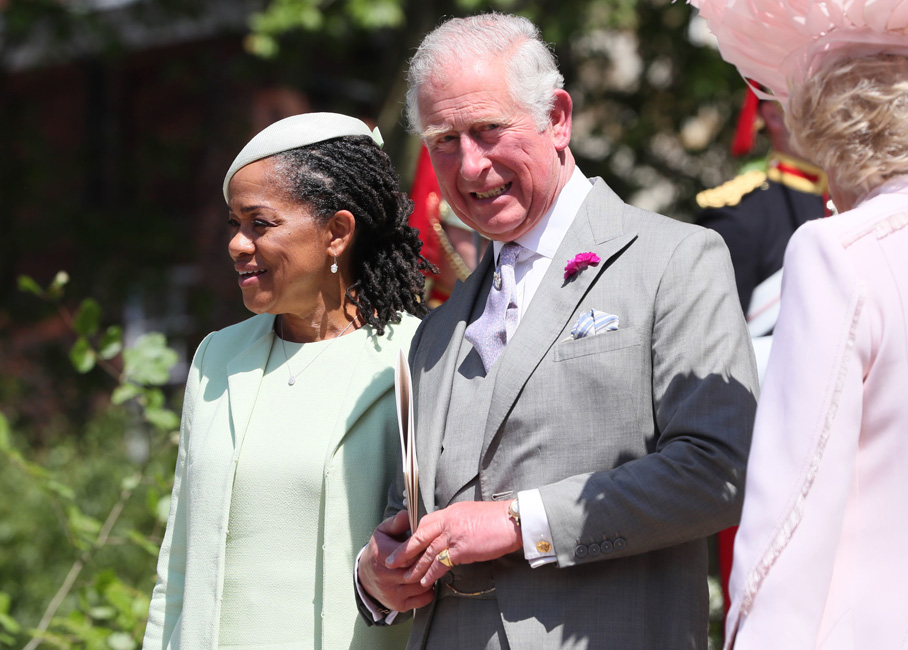 I wouldn’t go so far as to call myself your typical “royal watcher.” For me, “royal watching” is an evening spent binging The Crown on Netflix. That is, in fact, exactly how I like my monarchs, with all their pomp, circumstance and drama distilled down to one reasonably entertaining hour of my time. So when it came to the real-life royals and their big (and early) wedding day last Saturday, I hit the snooze button.

Don’t get me wrong — I like Prince Harry and Meghan Markle. They seem like a lovely couple and I’m happy for them. It’s just that, personally, I’m not into the whole idea of bowing to, or waking up early on a long weekend for, the royals — especially the type who no longer have the authority to shout “Off with his head!” for saying so.

“If that’s the case,” you, dear reader, might be asking youself, “why are you writing about the royal wedding?”

Well the truth is, like the slew of fascinator hats bobbing above guests’ heads at the ceremony, one couldn’t help but notice the all-day, wall-to-wall royal wedding coverage on Saturday. And from the assorted clips, gifs and memes I came across I actually gleaned some opinions about the occasion.

Still, I understand if you remain sceptical. I find that it helps to read the rest of this article with an English accent. It really adds a touch of class to the whole thing. Fair enough? Jolly good. Lets get on with it then…

Let’s be honest — it’s kind of amazing that Prince Philip is still standing. I don’t mean because he’s 96, but because he just underwent hip surgery in April and, from what I understand, his actual presence at the wedding wasn’t always guaranteed. Yet, come the special day, he was climbing the steps of St. George’s Chapel like he was 92 again. I mean, he took those stairs with more grace and energy than I did walking from my bedroom to the kitchen to get my morning coffee that same day. Prince Philip also didn’t yawn as much as I did. I say good on him for keeping fit, energetic and positive through the health setbacks he’s suffered over the years. And imagine this — if he lives long enough, and The Crown Netflix series gets to the point where it’s depicting the royals in modern day, there will barely be any actor old enough to cast as The Duke of Edinburgh. I can almost see the casting announcement now: “Tune into The Crown, season 7, starring Mel Brooks as Prince Philip.”

2. Doria Ragland — Mother of the Bride

It’s awkward enough being obligated to attend a party alone when you don’t know anyone there. If you’re anything like me you grab a drink, a plate of appetizers and then do your best to blend into the upholstery until the host acknowledges you attended, at which point you gulp the drink and get the heck out of there. So imagine, then, the predicament Meghan Markle’s mother, Doria Ragland, 61, found herself in last Saturday. Not only did she attend the wedding alone, but the wedding itself was hosted by the royal family and broadcast across the world. I mean, you try blending into the Queen’s upholstery while nibbling on tea and crumpets (I assume) when every other person you come across is a royal that you’re obliged to bow to and acknowledge. It’s not easy. And when you attend in the shadow of family drama — including an ex-husband who staged paparazzi photo shoots and then claimed a heart attack as an excuse for missing the wedding — it’s even worse.

So the fact that Ragland not only attended alone, but did so with such grace and strength, arriving with her daughter and moving among the royals like she was born into Buckingham Palace, makes her all the more remarkable.

“A millennium of world-shifting encounters — of violence and of romance and of acts in between — produced this scene: the sixty-one-year-old Ragland, an American who teaches yoga and does social work in Culver City, California, sitting in the opposite and equivalent seat to Queen Elizabeth II,” Doreen St. Félix wrote in The New Yorker. “One is a descendant of the enslaved, a child of the Great Migration and Jim Crow and seventies New Age spirituality; the other, the heir to and keeper of empire. Blood had long ago decided what life would be like for both.”

Ragland, nose ring and all, not only fit in, but through her elegance, strength and composure won the hearts and respect of both the royals and royal watchers around the world. And also one guy who woke up late and caught the highlights on replay.

Prince Charles seems like a genuinely good human being. He’s a loving father, a philanthropist, he was an early (and remains a staunch) environmentalist, he honours his family and he finally married the love of his life. Given, however, his divorce from Princess Diana and the public’s subsequent love and support for her in the years following, as well as revelations about his love affair with Camilla Parker-Bowles (now Camilla, Duchess of Cornwall), Charles is sometimes cast as the bad guy. But people on both sides of the Charles fence got a glimpse of the 69-year-old’s sense of chivalry at the royal wedding when he met Meghan Markle during her entrance and walked her down the remaining part of the aisle to the altar. The future king, of course, stepped in when it was announced that Markle’s own father was unable to attend, adding a gentlemanly touch of class to the otherwise familial drama that engulfed some of Markle’s relatives as the wedding approached.

Prince Charles’ duties didn’t end there, though, as he offered his hand to Markle’s mother, Doria Ragland, at the ceremony so the two could walk over and witness the bride and groom sign the register. He also escorted her out of the ceremony, linking arms with both Ragland and his wife, Camilla, as they exited the chapel.

It’s not often, particularly at royal weddings, that anyone other than the bride and groom steal the show, but Bishop Michael Curry, 65, the first African-American Presiding Bishop of the Episcopal Church came about as close as anyone. “Love is not only about a young couple,” he declared during his sermon at the ceremony. “Now, the power of love is demonstrated by the fact that we’re all here. Two young people fell in love, and we all showed up.”

That quote has been repeated in news clips and online articles ever since. And in his stirring sermon, Bishop Curry invoked everything from medieval poetry to the Bible to the words of Martin Luther King Jr. And while viewers at home took to social media to praise the preacher, the length of the 14 minute sermon (Bishop Curry insists he only went “a little bit” off script) and references to subjects like slavery seemed to make some in attendance uncomfortable. ABC kept track of the reactions, including Princess Beatrice, who “assumed an expression of goggle-eyed amusement … Elton John, in his pink plastic glasses, frowned in puzzlement as the guest in front of him stifled a smile. The Queen was seen to shrug slightly in resignation. Prince Charles looked exceedingly awkward. Zara Tindall gave a long glance of disbelief that was later described as ‘side-eye.'”

Evidently, some felt that a royal wedding was not the time or place to make allusions — even unintentional ones — to England’s slave-owning past. Good to know for the next round of royal nuptials.

More importantly, though, Bishop Curry’s words resonated beyond St. George’s Chapel to the world at large, a call for choosing love over hate, peace over war, equality over discrimination.

“Dr. King was right. We must discover love the redemptive power of love,” he said as he concluded his sermon. “And when we do that, we will make of this old world a new world. My brother, my sister, God love you. God bless you. And may God hold us all in those almighty hands of love.”

5. The Queen in Green

It’s a pretty bold move at a wedding to draw eyes away from the bride by wearing a bright green dress, jacket and hat (with an explosion of purple on the latter). I suppose, though, that when you’re the Queen of England, you’re going to draw attention whatever you do. Still, while the 92-year-old was there to celebrate her grandson’s wedding, she proved that she still embodies all of the power and influence that comes with the crown. From nabbing her favourite seat in the chapel to enjoying an unobstructed view (the seat in front of her is left open for this purpose) to commanding the attention and respect of those in attendance, Queen Elizabeth II remains a force regardless of age. Go on, I dare you to sit behind her at an event and tap her on the shoulder to ask her to take off her hat because it’s obstructing your view.

Evidently it turns out that, even at the reception, it’s she, not the newly-married couple, who dictates the proceedings. According to reports, when she decides she’s done eating, everyone must stop eating. Now if this were Henry VIII we’re talking about, that wouldn’t be a problem. You’d have time to go back for seconds and thirds before that guy decided he was full. But the Queen? Lets hope Harry and Meghan nabbed a piece of their own cake before Her Majesty declared her royal tummy full.

It’s even funnier when you imagine the waiter has one of those high-pitched Monty Python English accents. Now that I would have woken up early on a Saturday to watch.