Day 5: Prince Harry Walks in Diana’s Footsteps as He Continues Her work in Angola 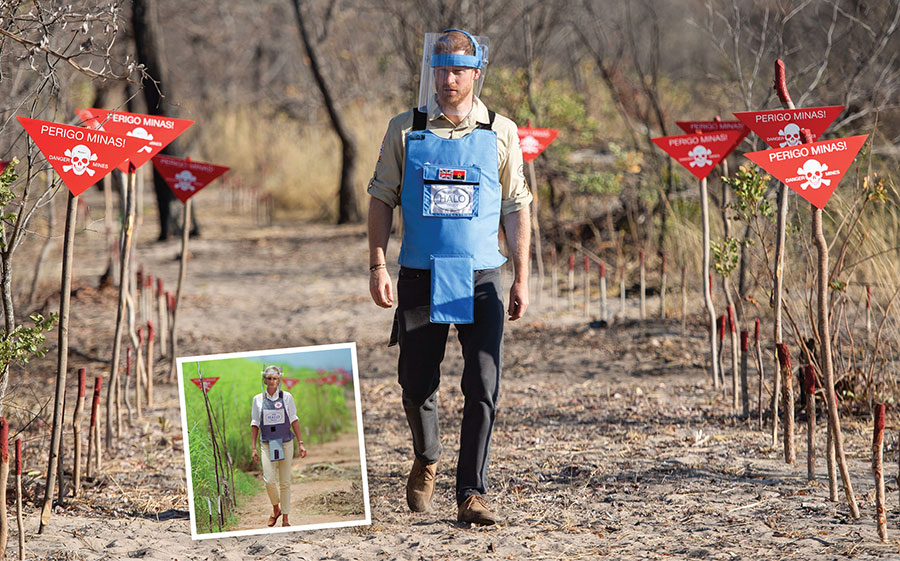 Prince Harry walks through a minefield on a visit to Dirico, Angola, 22 years after his mother, Diana, took her iconic walk along a similarly dangerous and desolate landscape in Huambo, which is now a thriving city. Photo: Pool/Samir Hussein/WireImage (Harry); Tim Graham Photo Library via Getty Images (Diana)

At 35, Harry, Duke of Sussex is just one year younger than his mother,  Diana, was when she visited Angola and, later that year, died in a tragic car accident in Paris. As a new father, the visit to Angola to pay tribute to Diana was bound to be moving. And today it was touching for all of us to watch her son follow her path, determined to finish the humanitarian work Diana started to decommission landmines in war-ravaged Angola.

The iconic images of Diana at Huambo in January 1997, just months before her death, are part of our collective memory. The desolate field contained live mines; the safety mask and body armour and the risks were real. She was learning how to find her post-divorce voice and power; it is sad to think of the lost potential and what she could have accomplished.

“It has been quite emotional retracing my mother’s steps … to see the transformation that has taken place, from an unsafe and desolate place into a vibrant community.” So much of Harry’s life, good and bad, has been lived in the spotlight’s glare, but recreating this moment was deeply felt.

Harry’s connection to Africa, and two decades of charity work on this continent, have always been to honour Diana’s memory.

This was Diana at her fiercest and most effective: getting cameras to focus on the distinctly unglamorous work of the Halo Trust. The organization has been steadily removing more than 100,000 land mines leftover from Angola’s bitter 27-year civil war, which ended in 2002. And it was Diana who put Huambo —and the issue of land mines and the damage they inflict on civilians — on the map.

Sadly, she did not live to see the international community come together to heed her plea: the Ottawa Treaty, formally known as the Anti-Personnel Mine Ban Convention, was signed just months after her death.

On the Sussex Royal Instagram site today, Prince Harry and Meghan said Diana helped change the course of history. “The Duke is humbled to be visiting a place and a community that was so special to his mother, and to recognize her tireless mission as an advocate for all those she felt needed her voice the most, even if the issue was not universally popular.”

Today, the city of Huambo is rebuilt and thriving. Prince Harry visited Avenida 28 de Maio, popularly know as Princess Diana Street, which was constructed where she walked 22 years ago. He had a contemplative moment by a grand tree known as the Princess Diana tree, which marks the exact spot where she was photographed in 1997, before delivering a speech.

But in the town of Dirico, in the southeast corner of the country, he took his own walk in an active landmine area, one that Halo Trust is still clearing. Formerly the site of an artillery base for anti-government forces, it is full of mines they laid as they retreated.

Harry, who saw active service in Afghanistan, was trained this morning how to explode a recently discovered landmine, which he detonated remotely. Then, clad in the same protective gear as his mother, photographers captured him walking through terrain that looked like Humabo did in Diana’s day, lined with red triangular signs emblazoned with skulls and crossbones and the words “perigo minas!,” Portuguese for “danger mines!”

It was designed to bring attention to the fact that landmines in Angola still pose a threat to life and limb. Halo has moved on to critical work in rural areas, as resources such as water and fields for livestock are restricted by active landmine zones.

At Dirico, the Duke of Sussex called land mines the unhealed scars of war. “By clearing the landmines we can help this community find peace, and with peace comes opportunity.”

He also brought the conversation back to another of his primary causes, conservation. “Additionally, we can protect the diverse and unique wildlife that relies on the beautiful Kuito River that I slept beside last night.”

There is a new push to clear mines from the Okavango headwaters, which has been designated a World Heritage Site across five nations in a protection zone called KAZA for Kavango Zambezi Trans Frontier Conservation Area. Because of the landmines, there is uncontrolled poaching. Once the mines are cleared, the focus can start to shift towards conservation and ecological preservation.

“Clearing the full watershed will take an international effort.,” Harry said in a speech. “Everyone who recognizes the priceless importance of safeguarding Africa’s most intact natural landscape should commit fully to this mission.”

Clearing landmines is a good job in Angola and Halo employs almost 400 local people, but now it has a new initiative to ensure some of these skilled, high-income and high-status jobs go to women. The trust’s 100 Women in Demining in Angola project is currently training all-female teams in an effort empower women, a cause close to Meghan, Duchess of Sussex’s heart.

Harry made a penultimate stop, another replication of his mother’s 1997 itinerary, at the recently renovated orthopaedic hospital in Huambo where Diana was famously photographed talking to Angolan children injured by landmines.  He met Justina Cesar, who was three when she lost her right leg and 15 when she met Diana in 1997.  Prince Harry officially renamed it the Princess Diana Orthopaedic Centre in his mother’s honour. His busy —and no doubt emotionally exhausting — day wound down with an evening reception at the British ambassador’s residence.

Related reading: Diana, Princess of Wales: A Virtuoso of the Photo Op in an Age Before Instagram