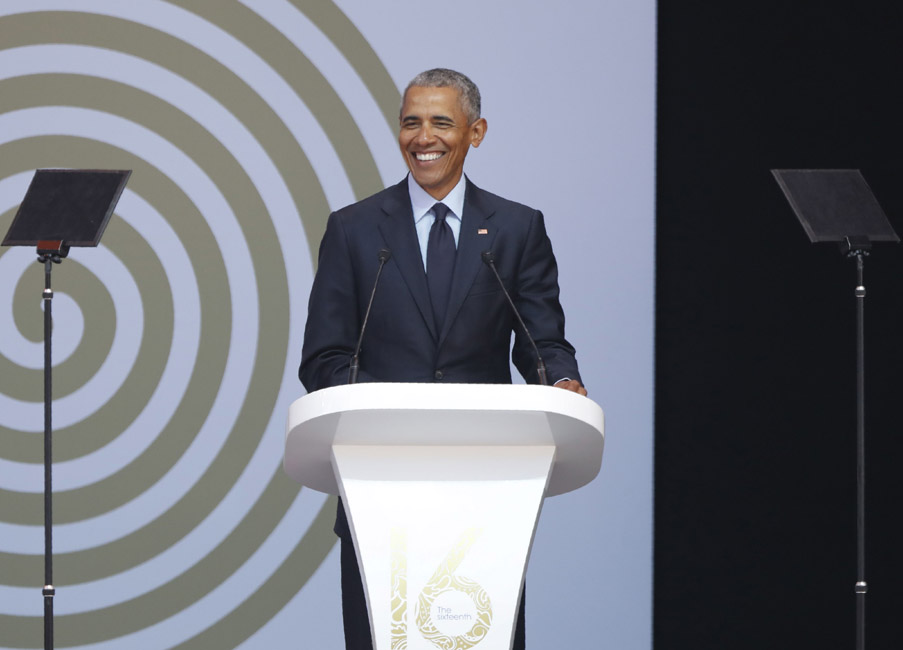 “Love comes more naturally to the human heart. Let’s remember that truth. Let’s see it as our North Star. Let’s be joyful in our struggle to make that truth manifest here on earth…” — Barack Obama

And so former U.S. President Barack Obama, 56, capped his speech in Johannesburg, South Africa, on Tuesday, before a crowd of 15,000 a day before what would have been the 100th birthday of former anti-apartheid leader and South African President Nelson Mandela. Delivering the 16th Nelson Mandela Annual Lecture, Obama paid tribute to the revered leader while also offering messages of hope and promise amid today’s frenzied political climate.

“We now stand at a crossroads a moment in time at which two very different visions of humanity’s future compete for the hearts and the minds of citizens around the world. Two different stories, two different narratives about who we are and who we should be. How should we respond?…

Obama delivered the speech a day after visiting his father’s homeland of Kenya, where he visited a youth centre run by his half-sister, Auma Obama, and even went viral with a video of him dancing alongside a crowd of people, including his 96-year-old step-grandmother.

During his Mandela Lecture, however, he took a moment to poke fun at his own age, noting that “When my staff told me that I was to deliver a lecture, I thought back to the stuffy old professors in bow ties and tweed, and I wondered if this was one more sign of the stage of life that I’m entering, along with gray hair and slightly failing eyesight. I thought about the fact that my daughters think anything I tell them is a lecture.”

The former U.S. president also had words for the current one, Donald Trump, who, the day before, met with Russian President Vladimir Putin and, during a press conference after, public took sides with Russia over American intelligence agencies that found that Russia had indeed interfered in the 2016 election. The disastrous press conference was met with anger from politicians and critics of all political stripes, who called it everything from “cowardly … dereliction of duty” to “nothing short of treasonous.” Obama, as is his tact, never referred to Trump by name, but referenced the climate of division and anger that the former real estate magnate has fostered since entering the political fray.

“I am not being alarmist, I am simply stating the facts. Look around. Strongman politics are ascendant suddenly, whereby elections and some pretence of democracy are maintained – the form of it – but those in power seek to undermine every institution or norm that gives democracy meaning. In the West, you’ve got far-right parties that oftentimes are based not just on platforms of protectionism and closed borders, but also on barely hidden racial nationalism. Many developing countries now are looking at China’s model of authoritarian control combined with mercantilist capitalism as preferable to the messiness of democracy. Who needs free speech as long as the economy is going good? The free press is under attack. Censorship and state control of media is on the rise. Social media – once seen as a mechanism to promote knowledge and understanding and solidarity – has proved to be just as effective promoting hatred and paranoia and propaganda and conspiracy theories.”

He also noted his displeasure that “ too much of politics today seems to reject the very concept of objective truth. People just make stuff up. They just make stuff up,” referencing “state-sponsored propaganda,” “internet driven fabrications” and “the blurring of lines between news and entertainment.”

“We see the utter loss of shame among political leaders where they’re caught in a lie and they just double down and they lie some more,” he added. “Politicians have always lied, but it used to be if you caught them lying they’d be like, ‘Oh man.’ Now they just keep on lying.”

Of course, as a celebration of Mandela’s centenary – and as a nod to the wave of optimism that Obama himself rode to the White House – the former president offered a message of hope to the younger generations who will lead the world into the future.