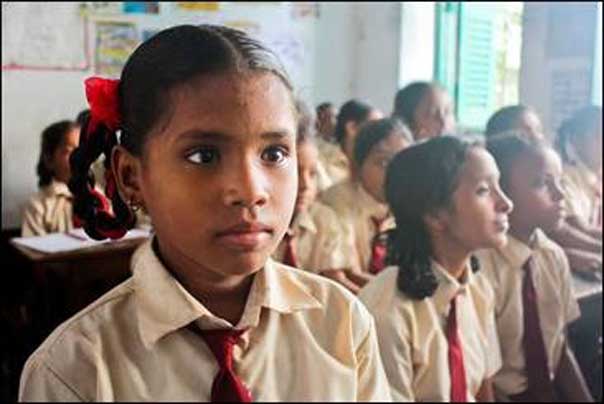 Perhaps the struggle for equality of the sexes ultimately comes down to dollars and cents. A study has shown that when 10 per cent more of its girls go to school; a country’s GDP increases an average of three per cent. And yet, globally, there are 33 million fewer girls than boys attending primary school, almost as many as the entire population of Canada. Why?

“Money,” succinctly answered Justin Reeves, director of NGO Partnerships for independent production company DocGroup, after the Canadian première of Girl Rising in Toronto on June 12. The critically acclaimed film, narrated by Hollywood heavyweights including Meryl Streep and Liam Neeson, documents nine girls from developing countries around the world and the impact education is playing in their lives.

The film is the centrepiece of the 10X10: Educate Girls, Change the World campaign to raise awareness, raise funds and just maybe help raise the value placed on girls. The picture’s young heroines helped write their artful reenactments and portrayed themselves in the picture with the exception of two Muslim girls who remained safely anonymous. Particularly poignant is that one of those two, an Afghan girl named Amina, was married off at age 11 to a cousin for a dowry with which her parents purchased a used pickup truck for her elder brother. That summation seemed to sting the predominantly female audience, with one concerned little girl asking of Reeves during a panel discussion after the screening “Is Amina okay?” It was no ordinary night at the movies.

The bright spot is that these girls may be better off because of school. The filmmakers reinforce the message with some surprising statistics. Girls with eight years of education are four times less likely to be married as children and the benefit is not just to them with children born to a literate mother being 50 per cent more likely to survive past the age of five. “Support a girl and you never know how many peoples’ lives she will change,” said Teriana Lesancho, an education advocate who participated in the post-première panel. The native Kenyan relayed the difficult choice her family made to sell one of their two cows in order for her to go to school. According to the World Bank, a girl with an extra year of education can earn 20 per cent more as an adult. Lesancho happily reported that once she acquired the means, after earning a degree here in Canada, “I bought my dad more cows than he would ever need.” Now that’s a positive return on investment indeed.