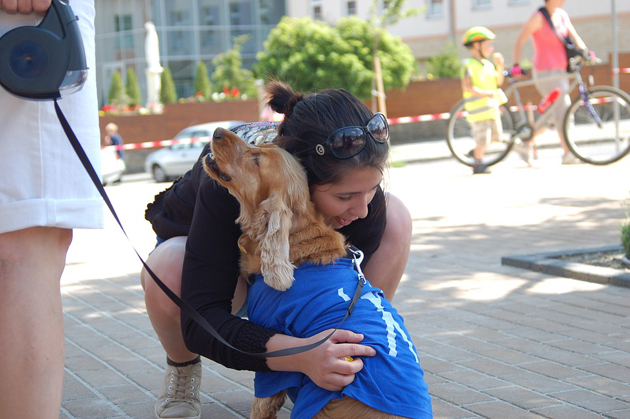 Dogs may be man’s (and woman’s) best friend, but recent research suggests our furry companions don’t enjoy our affectionate hugs and kisses as much as we think they do.

According to Stanley Coren, PhD, who studies canine behaviour at the University of British Columbia, more than four out of five dogs find physical human expressions of affection highly stress-inducing. His recent article in Psychology Today may come as a surprise to many pup owners who are used to going in for hugs and snuggles.

Dogs are cursorial animals, Coren writes. This means they’re designed for “swift running” – and during times of stress or anxiety, their first line of defence isn’t to bite but their ability to run away from the situation. Animal behaviourists believe that hugs, from adults and children alike, increases a dog’s anixety levels because they feel trapped and immobilized. This is often why kids, especially, receive a nip on the nose from their pooches.

Surprised by the lack of research on the subject, Coren scoured the Internet for photographic evidence of dogs showing signs of discomfort while being hugged. He estimates that nearly 82 per cent of the 250 photographs he looked at featured dogs who were giving off at least one obvious sign of stress.

So, before you start flipping through your own photos in a panic, check out these red flags to watch for:

1) Avoids eye contact. The most common harbinger is when he turns his head away from the person. In certain situations, your pup may even completely close his eyes.

2) Half-moon eyes. Your dog may show what is referred to as “half-moon eyes” or “whale eyes” which is when you can see the white portion of his eye near the rim, forming a crescent moon shape.

3) Ears down. When his ears are lowered or entirely slicked back against the side of his head, he’s likely experiencing a moment of high-level anxiety.

4) Lip licking. No, he’s not reaching for a kiss. More likely, he’s trying to let you know he’s uncomfortable with your hugs.

5) Yawning. In some cases, yawning – especially in the midst of a hug –is a sure sign that your pooch is unhappy and wants to break free from your embrace.

Do you think your dogs love your hugs? Let us know in the comments!