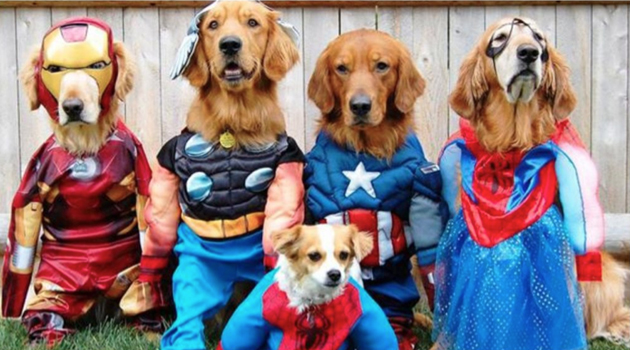 For many, Halloween is the best unofficial holiday of all time, so why shouldn’t your pup participate? Here, some of our favourite ideas for canine costumes.

1. Super heroes—and super villains (above)
With new fictional feats of heroism hitting movie screens each year, there’s no shortage of inspiration to be drawn from comic franchises. Do you prefer Marvel or DC? Main character or secondary? Heroes or villains? Expect to see dogs dressed as mini Avengers, Justice League members and Suicide Squad baddies this year.

2. TV shows
Game of Thrones has been a popular pick for a few years running—some people have even started naming their beloved pets after the main characters. This Halloween, prepare to be greeted by furry little Khal Drogos and Khaleesis. And then there’s The Walking Dead with it’s cliffhanger finale last season that left everyone riddled with nerves and anxiety. The show returns to AMC just in time for Halloween this year, which will undoubtedly inspire pup parents. Who doesn’t want to see a little zombie dog?

3. Star Wars
The franchise made a huge comeback last year with the latest installment and a new generation of fans. Pup parents who grew up watching the adventures that happened in a galaxy far, far away will definitely jump on the chance to dress their furry friends up as their favourite characters. Watch for the classics like Han Solo and Princess Leia, but also newer heroes Rey and Finn.

4. Little foodies
Dressing your dog up as a pizza instead of a princess is the wiser choice, right? Foodies love choosing delicious treats over traditional characters when it comes to costuming their pups. And you can find a ton of adorable options online.

5. Dinosaurs and mythical creatures
Dinosaurs have been fascinating for, literally, millions of years. Whether you’re a wannabe paleontologist or just a really big fan of Jurassic Park, there’s something undeniably charming about dressing your dog as a prehistoric animal. Mythical creatures are also a fun alternative. Opt for unicorns, a pegasus, centaurs or a satyr. There are tons of fun online options to choose from.

6. Humans at work
Dogs dressed as humans is simple but classic decision—and it’s always good for a couple laughs. Show off your sense of humour and get creative—Marilyn Monroe or Elvis are popular picks. Or dress them up to look like they’re headed into the office for an important meeting.

For the best premium media and products for your dog, visit World of Angus.