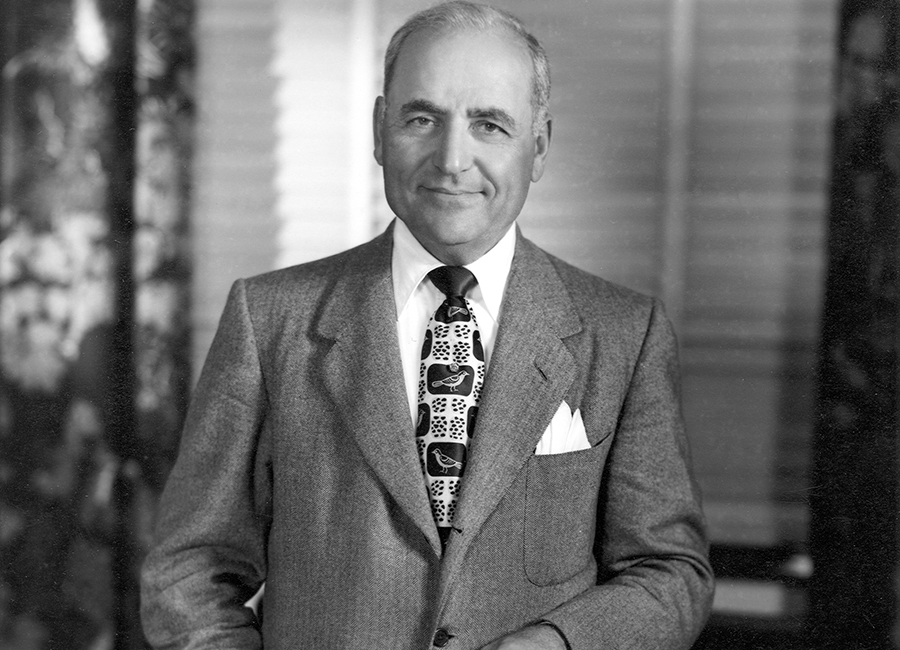 It started with a one-room office & a dream. Joseph Marion (J.M.) Haggar, a 34-year-old Lebanese immigrant, started Haggar in 1926 with a single goal in mind; to provide the working man with quality clothing he could afford. He believed that quality and craftsmanship should be a right, not a privilege.

‘Classic Style, Classic Comfort’ — Today, over 90 years later, his dream has been realized and his vision has stood the test of time. From becoming the maker of the #1 selling casual and dress pant style, to outfitting some of the nation’s most skilled athletes. Haggar has been privileged with designing, producing and dressing generations of men and women in comfortable, stylish, and affordable clothing they can feel proud wearing. Born in 1892, J.M. Haggar sailed from his homeland at the age of 13 to Mexico and then eventually on to the United States. His first jobs there were menial ones, but over the years his people skills landed him in sales and by 1926 Haggar had saved enough money to launch his own enterprise. He set up shop in a one-room office in Dallas, Texas where he personally purchased all materials, supervised all production, and handled all sales, and within a few years, his Pant Manufacturing Company grew to 250 employees and occupied 6,000 square feet on two floors. In 1933 Haggar upgraded its manufacturing methods to mirror Henry Ford’s Straight Line Production model of automobile manufacturing. Due to the revision of the process, manufacturing costs decreased while productivity increased allowing the company not only to survive, but to thrive during the Great Depression. Then during World War II, Haggar kept factories running 24 hours a day to supply uniforms for the U.S. military and by the end of the decade, Haggar had become the largest producer and marketer of slacks in North America, if not the world. ‘Slacks’ did not exist until some say Haggar coined the term in 1938. The idea behind slacks was that they were to be worn during leisure time away from work. Slacks quickly became an accepted part of the male wardrobe vocabulary. Around the same time, the Haggar name was becoming increasingly familiar across America through advertising. The company became the first pants manufacturer to advertise in major magazines, and the first to advertise on television in the 1950s.

A few of Haggar’s product innovations of the 1950s and 60s were “forever-prest,” one of the first lines of pants made from wrinkle-resistant material, “wash ‘n’ wear”, permanent press, and “double knit” slacks. By the company’s 50th birthday in 1976, Haggar had introduced sports coats, vests, suit separates and leisure tops to go with its slacks allowing a customer fond of Haggar merchandise to pretty much clothe himself entirely in Haggar goods regardless of the occasion. Haggar’s innovations reached beyond apparel with their creation of the ‘Haggar Hanger’ in 1971, which for the first time allowed retailers to sell pants on hanging fixtures instead of folded on tables. In the 1980s, Haggar became the first in the apparel industry to adopt EDI quick-response inventory replenishment, and to use UPC codes to ticket merchandise. More recent Haggar product innovations include but are certainly not limited to; 100% cotton ‘wrinkle-free’ pants, comfort stretch fabrics, moisture-wicking fabrics, eco-friendly fabrics that utilize recycled fibres and pants with hidden self-adjusting waistbands that allow for a more comfortable fit all day. Haggar now has over 80 branded brick-and-mortar retail locations, a dedicated direct-to-consumer ecommerce business, and its products are sold in over 10,000 stores throughout North America.

To learn more about Haggar and all its offering, visit www.haggar.ca