St. Augustine Delivers History with a Dose of Fun 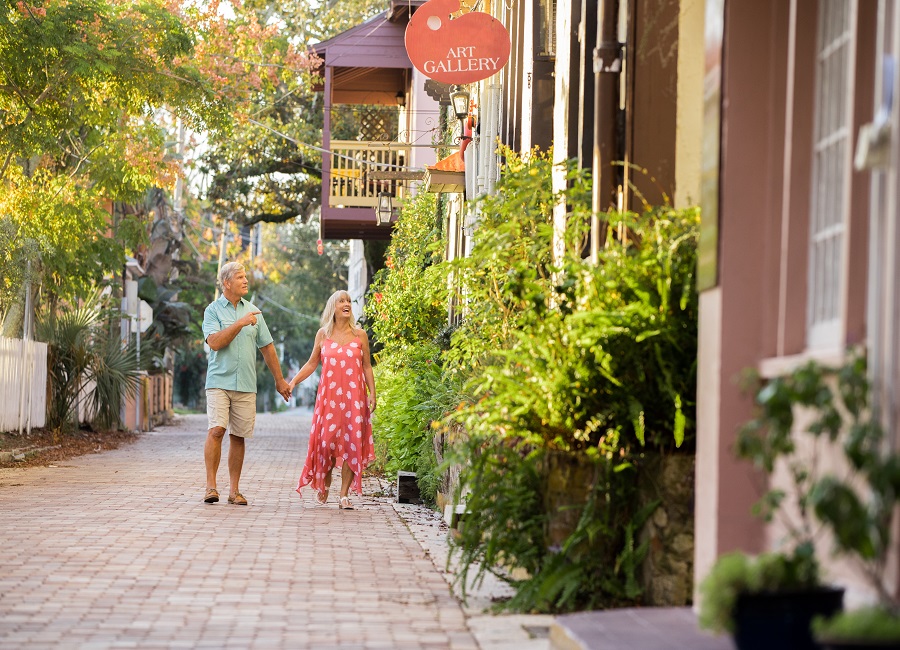 St. Augustine was founded in 1565 as a Spanish military outpost—and you can feel that Spanish heritage in its historic downtown, resplendent with Spanish Colonial architecture. Red-brick lanes lead to centuries-old churches, and you’ll find the Castillo de San Marcos National Monument, the oldest masonry fort in the United States, within walking distance.

St. George Street, a pedestrian-only thoroughfare that anchors the downtown area, tempts visitors with chocolate shops, art galleries, gifts, and every sort of eatery imaginable. And all around, there’s history, mingled with the modern pleasures.

The Old City Gate, built in 1808 as a defense, marks the north end of St. George Street. The stout coquina pillars and wall promise a unique photo opportunity. Further down the street, you can explore the Oldest Wooden School House, built more than 200 years ago.

St. George Street also offers attractions, including the Medieval Torture Museum, which promises to “transport you back in time hundreds of years to some of the most miserable moments in human history.” The museum highlights methods of medieval torture through displays, props, and mannquin; while it’s fascinating and unique, it’s not for kids or those prone to nightmares.

Don’t forget to save time for areas close to St. George Street. Hypolita Street, Cuna Street, Cathedral Place and King Street are home to still more shops and restaurants, particularly near Casa Monica Hotel, a magnificent structure with a storied past. If you’re looking for a quieter alternative, Aviles Street, which holds bragging rights as the oldest street in the United States, features a quaint neighborhood complete with cobblestone streets, highlighted with shops, cafes, historic sites, and galleries chock-full of original art.

You don’t need to just let your feet do the walking: other ways to tour the city include an idyllic horse-drawn carriage ride or the popular trolley.

St. Augustine doesn’t go to sleep when the sun goes down. Night owls can choose from an abundance of pubs, bars and restaurants, many with live entertainment.

With its years of tumultuous history, it’s hardly surprising St. Augustine is one of the most haunted cities in the country. Numerous guided ghost tours illuminate its past—who knows what you’ll see or hear on these spine-tingling adventures?

St. Augustine invites golfers to bring their clubs and hit the links, as the area boasts plenty of championship golf courses. Family attractions, featuring everything from alligators to ziplines and more, are sure to keep your whole gang smiling.

Head just out of town to explore 42 miles of pristine Atlantic beaches, where you can swim, surf, or just kick back on the sand.

While you’re there, make sure to visit the historic 1874 St. Augustine Lighthouse, a stately black and white sentinel at the nation’s oldest port. If you want to feel the burn and snag a unique view of the area at the same time, you can climb the 219 steps to reach the observation deck of the 165-foot-tall Lighthouse. Hands-on exhibits, daily programs, and nature trails round out the fun. For an especially spooky treat, take a ghost tour. The site is consistently ranked as one of the most haunted sites in St. Augustine.

Whether you’re looking for a romantic vacation, a family-friendly outing, or a girl’s getaway, St. Augustine is sure to deliver.