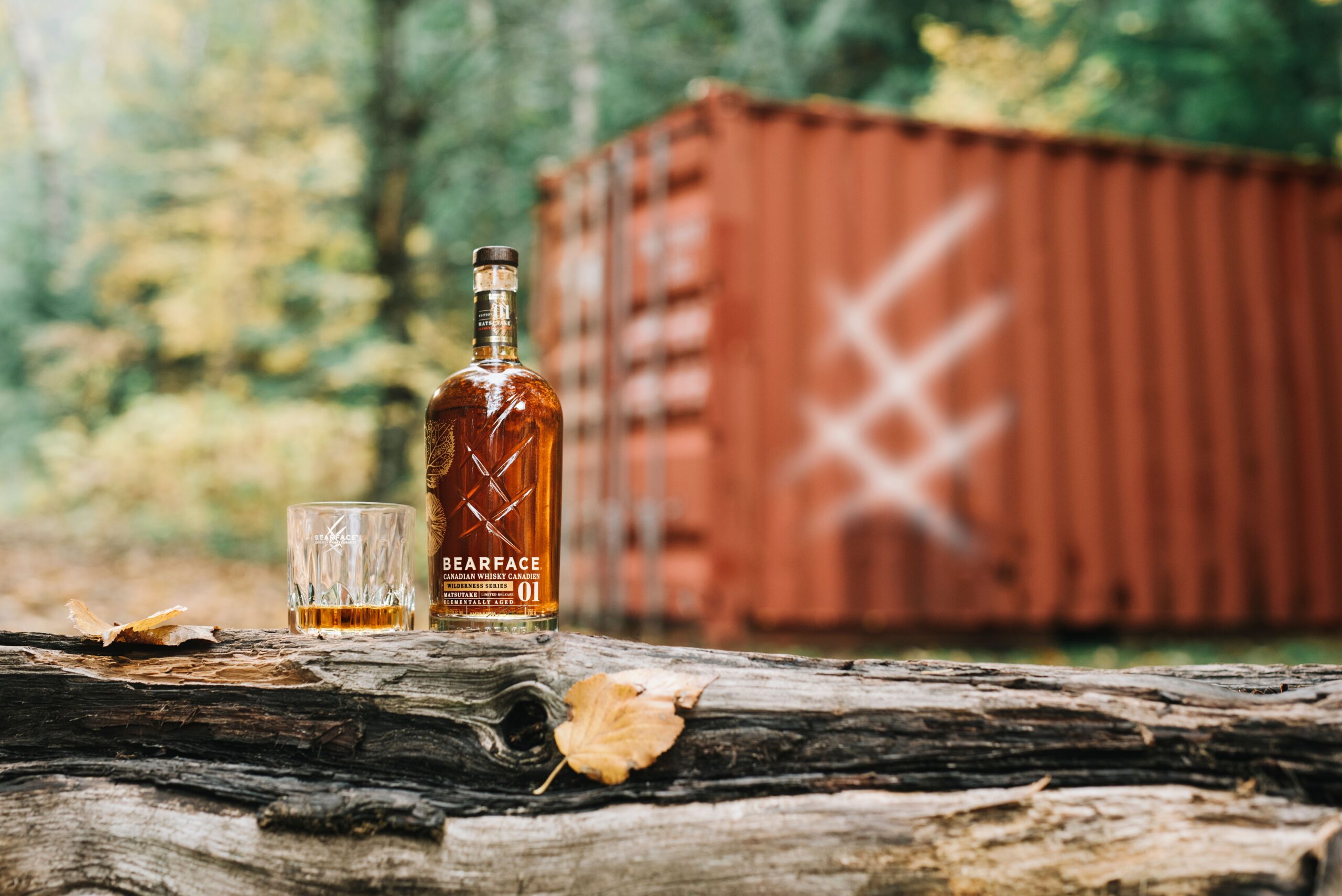 Drawing inspiration from the Canadian wilderness and making full use of the freedoms that Canada offers as whisky-makers, BEARFACE has been inspired to create the new ‘BEARFACE Wilderness Series’. Launching spring 2022 with ‘Matsutake Release 01’.

Andres Faustinelli, Master Blender, BEARFACE Whisky said: “The BEARFACE Wilderness Series is another example of how we connect with nature and the elements to create whiskies that are wilder and more adventurous than anything else out there”.

The Wilderness Series finds BEARFACE infusing premium single grain whisky with rare and exceptional ingredients foraged in the Monashee Mountains. The first of this release is the Matsutake edition– an extremely scarce and sought-after mushroom species that grows wild in British Columbia. As well as being rare and delicious, the Matsutake mushroom is unusually difficult to cultivate and can be harvested only once a year. Consequently, it commands top dollar worldwide – especially in Japan.

Bottled under the name BEARFACE Wilderness Series: Matsutake Release 01, this extraordinary whisky is aged in three different styles of sherry casks. As part of BEARFACE’s unique Elemental Ageing process, the casks are matured in repurposed shipping containers and exposed to extreme temperature variations throughout the seasons in the Canadian wilderness.

The result is a complex, layered whisky, with nutmeg, cinnamon and rounded nuttiness, followed by a leafy earthiness and an umami finish. “Umami” being a key word in Japanese cuisine that identifies the “fifth taste” in foods and beverages (aside sweet, sour, salty and bitter) that lends a savoury depth. The Matsutake mushroom flavour profile provides a deepened savory flavor finish.

“In recent years, many of the world’s most acclaimed mixologists have been embracing the potential of umami-rich fungi as an inventive cocktail ingredient,” says Bram Bolwijn, Sommelier Forager at BEARFACE. “The Wilderness Series: Matsutake Release is an exciting next step in our ongoing quest to create premium whiskies that are unlike any other in the world.”

Every whisky tells a story, but the BEARFACE narrative is rooted deep in the wilds of British Columbia. Their new Wilderness Series expression is set to intrigue adventure-loving whisky drinkers who want to experience the best of super-premium craft spirits being made in Canada today.

Andres added: “Here in Bear Country, we have the inspiration, and we have the freedom to make wild ideas happen. This is whisky the world wishes it could make, but only Canada can”.

BEARFACE has earned multiple international awards for its remarkable, boundary-breaking whiskies – most recently a Double Gold Medal at the 2021 edition of the prestigious San Francisco World Spirits Competition.

And now, BEARFACE continues its mission of unparalleled whisky innovation with the introduction of the new Wildness Series.

The NEW BEARFACE Wilderness Series: Matsutake Release retails for CAD$ 49.95 is bottled at 42.5 % and will be available across Canada (except in Quebec) beginning in Spring 2022, but only for a limited time. Other releases in the Wilderness Series will follow. More details can be found at bearfacewhisky.com.