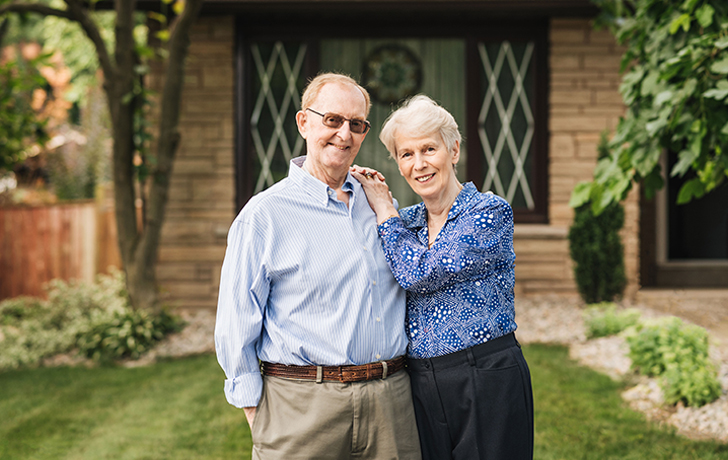 Allan and Margaret Ingram were losing hope. Then, a transplant saved Allan’s life. Now, the Ingram’s are creating a legacy of hope for patients like him. In 2014, Allan was diagnosed with liver failure and admitted to the Ajmera Transplant Centre at TGH, part of University Health Network (UHN).

Unfortunately, this didn’t mean there was a donor liver available to him.

“People have to understand, it’s not like a normal wait where you go on a list, you see people go, you move up” says Allan. “It doesn’t work that way, because everything is governed by the MELD score.”

MELD (Model for End-Stage Liver Disease) is a scoring system used to assess patients for the severity of chronic liver disease. Allan’s score was not high enough for transplant to be considered a real possibility, and Allan and his wife Margaret were losing hope. They knew age 70 was the cut-off, and Allan was turning 69 with his health rapidly deteriorating.

Then, in April 2017, an MRI scan indicated the presence of a lesion on his liver which bumped up his MELD score. Suddenly there was a chance for him to the transplant he desperately needed.

“The phone rang and I can’t remember the exact words, essentially it was ‘This is Toronto General. We think we have a liver match for you. Can you get here as quickly as you can?’ We got there as quickly as we could,” says Allan. There were delays due to the operating room schedule and unforeseen circumstances which had both Allan and Margaret worried that the procedure might be cancelled. But at 6 p.m. the following day, Allan went into surgery to receive his new liver.

“I could not say one negative word about Toronto General Hospital, from my experience through the transplant and my experience before and after,” says Allan.

They so grateful for the care Allan received that they decided their ongoing donation to UHN Foundation was not enough. They wanted to contribute to the hospital through a planned estate gift.

While they usually give smaller amounts to various charitable organizations, they wanted their gift to make a larger impact.

“As Allan said, Toronto General gave us our life back,” says Margaret. “We decided we would like to do something down the road to help with the tremendous research that is going on at UHN.”

While the majority of their estate will be left to their son who has four children of his own, Allan and Margaret worked with staff at UHN Foundation and then consulted a lawyer, who easily changed their wills to include UHN Foundation as a beneficiary.

Only a year after the surgery, the couple went on a river cruise in France to celebrate their wedding anniversary, something they hadn’t been able to do in a long time. The following year they travelled to the South of France and Italy, only stopping their travels due to the COVID-19 pandemic.

Today, Allan is grateful for the gift he has been given.

“You should perhaps change the name of the hospital. I would allow you to leave the initials TGH, but change it to Totally Great Hospital. Because without what was done to me there, I would not be alive today. It’s as simple as that.”

With a gift in your will to UHN, you can support medical breakthroughs that will transform patient care for generations to come. The promise of a healthier world starts with you. Learn more at UHNfoundation.ca/mylegacy or contact [email protected].