Blast from the past? 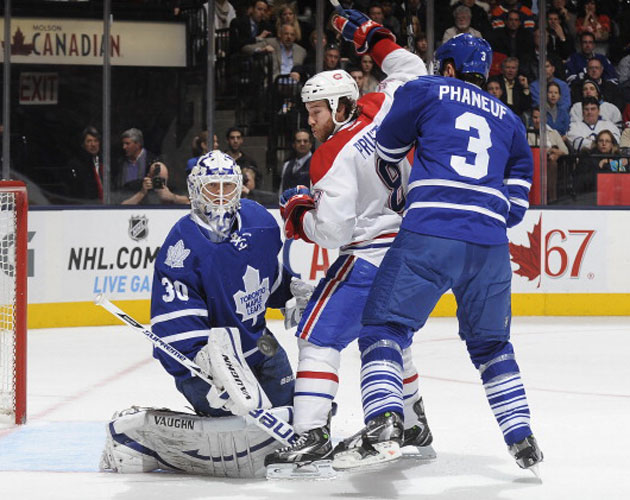 Whenever the Toronto Maple Leafs take the ice against the Montreal Canadiens, the media inevitably bills it as clash between two of hockey’s oldest rivals. While it may be the oldest rivalry, it’s been mostly dormant since 1967, the last year the two teams met in the Stanley Cup finals. Zoomer-aged fans can remember that series.

Since ’67, however, it’s been all Habs: Montreal has won 10 Stanley Cups while the Leafs have won, umm, none. And since 2000, neither team has been particularly good and the rivalry has become something of a joke, overtaken by the more entertaining and heated battles between Pittsburgh and Philadelphia or Vancouver vs. Chicago.

This year though, the two oldest Canadian clubs have surprised everyone by playing excellent hockey and battling each other for a playoff spot. Better yet, there seems to have been a renewal of hostilities between the two clubs.

The Habs stung the Leafs 5-2 on Wednesday, outshooting them 40-23 in the Air Canada Centre and exacting a measure of revenge for the 6-0 drubbing they suffered to Toronto earlier this season.

Canadiens’ left-winger Max Pacioretty scored two goals (including this wicked shot), especially sweet because it came against Leafs’ forward Mikail Grabovski who reportedly bit him in the last contest. In Wednesday’s game, Dion Phaneuf and Brandon Prust were preparing for a fight before the Leaf’s defenceman politely declined, surely not the right message the Toronto captain should be sending to his squad. He’ll be hearing it from Don Cherry, no doubt.

The recent victory puts Montreal at the top of its division, five points up on the Leafs. The clubs face off against each other two more times this season, including the final game of the year. If that game has playoff implications, it should be a beauty.