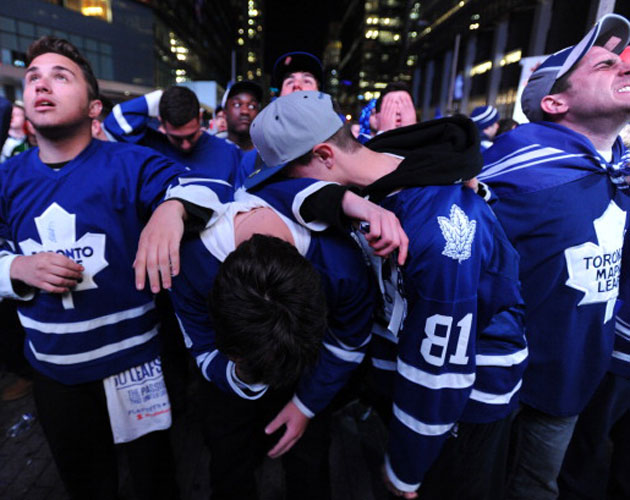 That was a dream last night, wasn’t it? The Leafs didn’t actually lose in overtime to the Bruins? There’s absolutely no way they blew a three-goal lead in the third period? No sir, that never happens.

And isn’t that Matt Frattin with a breakaway with four minutes left to put the game away – he scored, right?  What, he missed the freakin’ net on a breakaway? You’re telling me he missed? Completely? I suppose now you’re going to say Boston scored to make it 4-2? Yeah, like that really happened. It did? And then Lucic got one with the goalie pulled?

No worries, the Leafs are still up by one. They’ll hold on to win, right? Surely they can’t blow a three-goal lead in Game 7 with under 10 minutes to play? Because that’s never happened before. Not in the history of the NHL. Man, I bet they’re partying big time in Maple Leaf Square!

Seems pretty quiet in Toronto though – what gives? Boston’s Bergeron tied it? You’re kidding me, right? No, no, this is a dream, you can’t fool me. This game was over. Done. Toronto had it. They slew the mighty Bruins! On to Round 2! Bring on the New York Rangers!

Wait, why is Reimer lying on the ice, way out of position? That can’t be Bergeron sliding the puck into the wide-open net? Where are the defenceman? Can’t they clear it? Why are the Bruins players mobbing each other? You’re not saying the Bruins scored in overtime? The Leafs blew a three-goal lead?

That didn’t just happen, did it?

Tell me it’s not another Leaf collapse?

It’s all just a nightmare, right?