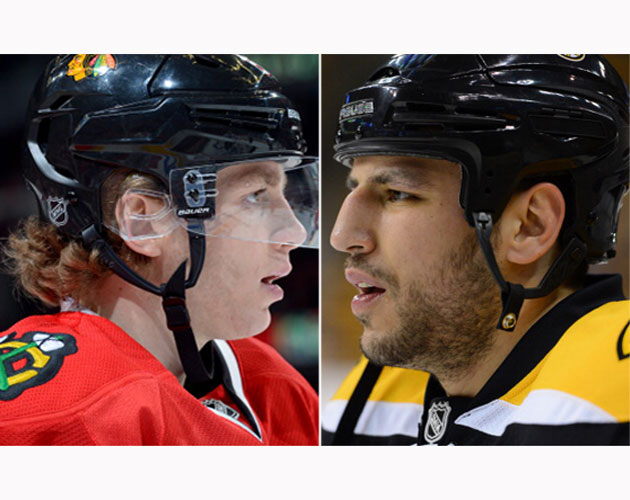 The Stanley Cup Finals begin on Wednesday, pitting the Chicago Blackhawks against the Boston Bruins. It’s a compelling match-up between these two Original Six clubs that should provide great hockey.

Here’s our preview of what promises to be Both Boston and Chicago come into the series riding hot streaks. Boston got to the Finals by beating the Pittsburgh Penguins in a surprisingly easy four-game sweep. The Blackhawks punched their ticket for the Finals by defeating the defending champ L.A. Kings 3-2, in a double-overtime game Saturday.

As the two teams won’t take to the ice until Wednesday, let’s breakdown the strengths and weaknesses and see if we can accurately predict which team will lift the Stanley Cup.

1) Playoff history: Despite the fact we have two Original Six teams, there isn’t much playoff history to speak of between these two. The Bruins have a 5-1 edge in playoff series between the two teams. Most of them have been unmemorable, save for this grainy video of a (1970?) playoff match between Chicago and Boston where the Bruins’ Derek Sanderson tries to take Blackhawks’ goalie Tony Esposito’s head off with a wicked elbow. Typical Bruins hockey of the 1970s – hasn’t really changed much to this day. Of interest in the video: Bobby Hull and Bobby Orr, two of the greatest players ever, end up wrestling each other in the scrum. Look closely and you’ll see Hull’s bald pate – must have been a few years before he began sporting a toupee.

Boston: Tukka Rask has been in fine form all playoffs (except for this one pratfall in Round 2 versus the New York Rangers series). He was good against Toronto, better against the Rangers and was outstanding against the Pittsburgh Penguins in the Eastern Conference final, posting two shutouts and not allowing a goal to either Sidney Crosby or Evgeni Malkin.

Chicago: Corey Crawford has been solid, if not spectacular, for the Blackhawks in this year’s playoffs. Actually, Chicago doesn’t expect Crawford to win the series all by himself – they’ll be content if he doesn’t blow it by allowing the killer soft goals, something he’s done this playoffs with alarming regularity. You can’t get away with that against the Bruins.

Boston: Defending the Bruin’s zone begins and ends with the enormous Zdeno Chara. Blessed with a ridiculously long reach, he’s able to shut down half the ice, kill penalties and score the occasional goal. The rest of the Bruin rearguards are solid and, if you don’t cover them at the points, they’ve shown a penchant for scoring a lot of key goals in these playoffs.

Chicago: While Chicago lacks a big shutdown defenceman like Chara, they do have two excellent blueliners in Duncan Keith and Brent Seabrooke, who log the bulk of the important minutes. Keith can carry the puck and score while Seabrooke will be called upon to handle the big Bruin forwards. The second tier of the Chicago’s defence is not as solid as Boston’s and coach Joel Quenville will have to match them up strategically against the Bruins’ third and fourth lines, in hopes of containing the damage.

Boston: The Bruins’ offense has been led all playoffs by the David Krejci, Milan Lucic and Nathan Horton line, which has been almost impossible to stop this playoffs. (Just ask the Leafs.) However, the key to containing the Bruins is to stop the second line of super-pest Brad Marchand, ancient Jaromi Jagr and the multi-talented Patrice Bergeron, a line that dominated the Penguins.

Chicago: The Blackhawks are led, of course, by the line of captain Jonathan Toews, puck-wizard Patrick Kane and big man Bryan Bickell, who’s had a tremendous playoff run so far. But if the first line fails, as has happened often these playoffs, the second line is also tough to contain, with Marian Hossa and Patrick Sharpe, bona fide playoff scorers.

Boston: B’s coach Claude Julien has made all the right moves since winning the Cup in 2011. He knows his team well and has an uncanny knack of putting the right players on the ice to score the key goals. He’s also a line-matching guru and will take advantage of the last change on home ice.

Chicago: ‘Hawks’ skipper Joel Quennville has also won a Cup, with this ‘Hawks team in 2010. He has a great familiarity with his players and, like Julien, seems to know how to pull the right strings at the right moment.

6) Intangibles Both teams have OK powerplays and top-flight penalty-killing. But The Bruins have a distinct advantage in that their big, bruising forwards can wear you down physically as well as on the scoreboard. They also appear to be getting stronger as the playoffs roll, and are exuding the confidence that make them feel like potential Cup winners. The Blackhawks certainly have the talent to make this a tight series, but lack the overall grit and desire to win.

Who will win? On the strength of goaltending and willpower, the Boston Bruins will prevail and capture their second Stanley Cup of the decade, winning the series 4 – 2.