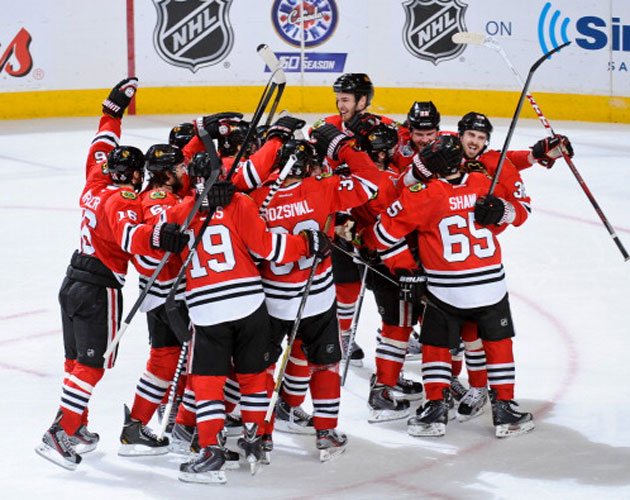 The Stanley Cup Finals got off to a dramatic start as the Chicago Blackhawks’ Andrew Shaw scored late in the third overtime period to give his club an exhilarating – and exhausting – 4-3 victory, and a 1-0 series lead.

Shaw, who is anything but a goal scorer, deflected the puck past Bruins’ goalie Tukka Rask with his leg to end the marathon contest, the fifth longest game ever in the Finals.

Boston got off to a great start, generating a 3-1 lead and silencing the huge Chicago crowd. But the lead was quickly dissipated after two quick Chicago goals tied it, sending the game into extras.

The first overtime provided some exciting moments but as the period wore on and the ice got slushy, chances were at a premium. It didn’t help that the players were clearly exhausted, with only short bursts of energy followed by long stretches where they were skating around like zombies.

The second overtime was even slower and the players’ glazed facial expressions and body language showed they were clearly wearing down. By the third extra period, it was clear that the winning goal – if it ever was going to happen – would come on a lucky break. And that’s just how it played out, with the puck bouncing off Shaw’s leg. After the game, Shaw noted as much: “We knew it wasn’t going to be pretty at that point. You could tell both teams were physically exhausted.”

The players will have two days to rest before the Series resumes on Saturday.

In the time being, here’s a breakdown of the key areas of the first game:

1) Goaltenders
Both goalies played extremely well, especially Rask who faced 63 shots giving up a couple of unlucky goals. The Hawks’ Crawford looked shakey at times but played lights-out in overtime and was a huge factor in the win. Edge: Chicago

2) Defence
Chicago’s Duncan Keith played over 48 minutes and was a pillar of strength.  The rest of the defence corps played error-free, and were bailed out by a couple goal posts in overtime. D-man Johnny Oduya even contributed a goal. Boston’s defence, led by Zdeno Chara, played their usual shut-down, block shot hockey. The winning goal, however, came because Bruins Denis Seidenberg had left his post to retrieve his glove, leaving Shaw open for the winner. Edge: Chicago

3) Forwards
With the exception of Dave Boland and Andrew Shaw, both fourth-liners, the Chicago forwards did not have an exceptionally good game. Boston’s first line brought it’s A-game, led by Milan Lucic’s two goals. However, a late injury to Nathan Horton slowed that line down a bit. Edge: Boston

4) Intangibles
Chicago’s had an extended two-man powerplay but failed to generate any chances. They must improve that for Game 2. Boston, though obviously dispirited after the loss, must stick to their game plan. They were the better team for much of the game and, with a little luck, should be leading this series. Edge: Even