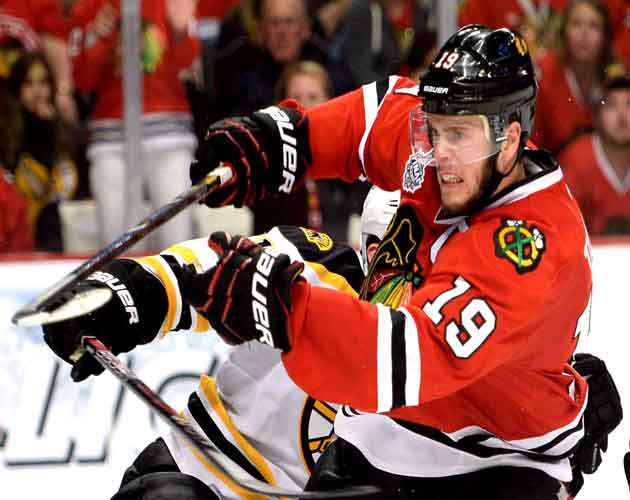 Two games into the Stanley Cup Finals and it’s the Boston and Chicago fourth-liners who are garnering all the headlines. Can the Chi-town top stars step it up for Game 3?

In Game 2, Boston Bruins lesser-known players scored two goals, including Daniel Paille’s overtime winner, to even up the series at one game apiece. This follows on the heels of Chicago’s Game 1 victory, which came courtesy of a triple-overtime goal scored by another fourth-liner, Andrew Shaw.

As the teams head to Boston for Game 3 Monday night, it’s high time that Chicago’s stars step forward. It’s not that Blackhawk sinpers Jonathan Toews, Patrick Kane and Marian Hossa have played poorly – they haven’t – it’s just that they’ve been kept off the scoreboard, thanks to Tukka Rask’s brilliant goaltending and some unlucky bounces.

But that must change for Game 3 if the Hawks hope to take Boston’s always raucous crowd out of the game. The high-powered Chicago forwards must figure out how to fight through Boston’s tight defensive game as well as trying to find an avenue to the net through the thicket of Bruin sticks that are consistently blocking their way.

Toews, in particular, is having a rough go, mired in a deep slump that’s seen him score only one goal the entire playoffs. Yes, he’s still contributing defensively and winning face-offs but the Hawks simply aren’t going to win unless Toews et al start lighting the lamp.

Chicago’s captain told NHL.com that he’s dealing with the slump well: “For a lot of guys it could be discouraging when it doesn’t go your way, but for myself, I just try to stay with it and not dwell on it too much. Be positive going into every game and we’ll keep going with that same attitude.”