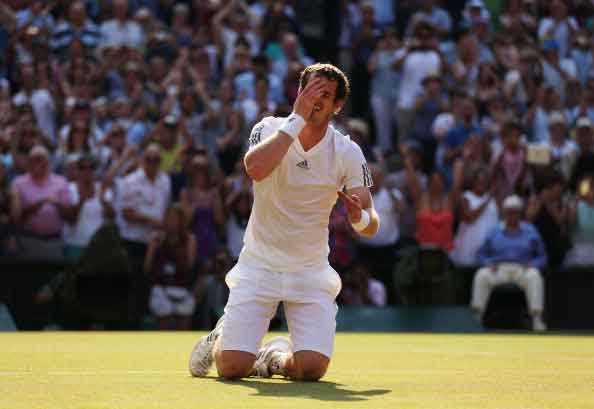 Andy Murray wins the affection of British sports’ fans with a straight-set victory over Novak Djokovic at Wimbledon, erasing 77 years of futility at the All England Club.

A private message from Queen Elizabeth a tweet from Posh Spice (@victoriabeckham) and the undying love of the Great Britain sporting public were among the immediate rewards bestowed upon Andy Murray, after he pounded out an exciting win over Novak Djokovic at Wimbledon.

Not only did the Scottish-born Murray finally win his first title at the historic All England Club after eight attempts, but in doing so he became the first Brit in 77 years to win the men’s singles, a feat last accomplished by Fred Perry.

Despite its brevity, Murray’s straight sets victory over No. 1 ranked Djokovic was a hard-fought affair. After overcoming initial jitters, Murray was able to dominate the 26-year-old Serb, relying on his booming serve and taking advantage of Djokovic’s uncharacteristic unforced errors.

“Winning Wimbledon is the pinnacle of tennis, and the last game almost increased that feeling,” said Murray afterwards. “I worked so hard in the final game. It was the hardest points I had to play in my life.”