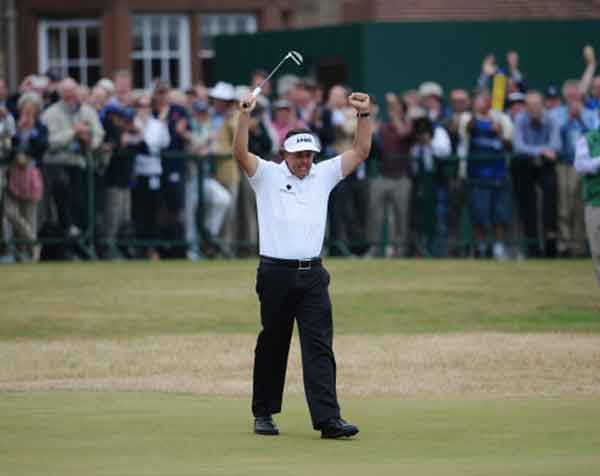 Phil Mickleson called it the best round of golf he’s ever played and few could disagree.

Mickleson came out of nowhere to shoot a 5-under 66, capturing his first British Open in his long and distinguished career.

“To play the best round arguably of my career, to putt better than I’ve ever putted, to shoot the round of my life … it feels amazing to win the claret jug,” said Mickelson after accepting the trophy at the Muirfield course, with his wife and three kids looking on nearby.

“Best round I’ve ever seen him play,” said Mickelson’s caddie, Jim “Bones” Mackay. His golfer was one of the few who successfully navigated Muirfield’s the slick greens and difficult pin placements that caused so much controversy over the weekend.

The 43-year-old Mickelson entered the final day trailing Lee Westwood by five strokes. But Westwood stumbled badly, as did all the leaders, including Tiger Woods, who shot a disappointing 74, extending his five-year winless run at golf’s majors. Tiger, dogged by bad putting on the final day, finished 5 strokes behind, in a tie for sixth. Sweden’s Henrik Stenson, who was briefly tied for the lead, finished second at even par.

Best Quote: “I didn’t feel like I was 56 years old out there; I felt like I was 32.” Mark O’Meara, on playing himself into contention with an excellent second round. O’Meara couldn’t keep up the pace in the final two rounds, finishing in a tie for 58th.

Best subplot: On Day 2, 49-year-old Miguel Angel Jimenez, the second round leader, was trying to become the oldest golfer ever to win a major. Unfortunately, Jiminez also stumbled badly in the last two rounds, finishing plus-5, which tied him for 13th.