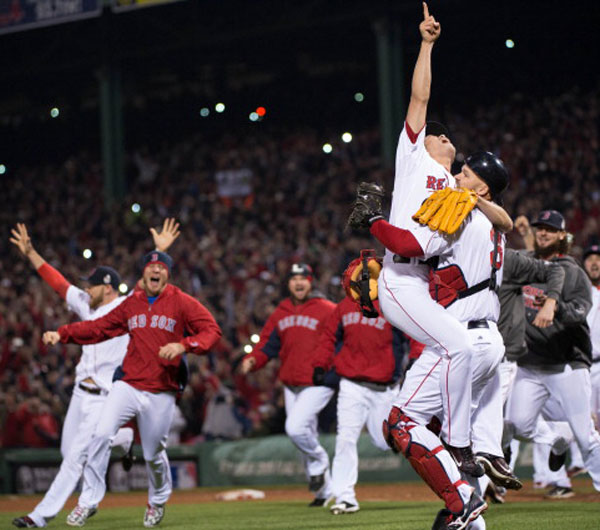 Hats of to the Boston Red Sox as the bearded fools from Beantown captured their third World Series since 2004.

Led by first-baseman and World Series MVP David Ortiz, the Sox made quick work of the clinching game against the St. Louis Cardinals, going up 6-0, before coasting the rest of the way to an easy 6-1 victory. Former fan-unfavourite John Lackey got the win, the second time he’s been victorious in World Series Game 7. When the final out was recorded, the Sox stormed the field and the fans cheered their first Series-clinching win at home since 1917.

RELATED POST: Toronto Blue Jays 2013: Where did it all go wrong?

Ortiz was unstoppable at the plate. He hit an otherworldly .668 including two home runs and six RBIs. “I wasn’t trying to be the guy, but I know I got to get something done to keep the line moving,” Ortiz told reporters after the game. “I don’t even have to do anything today, I guess, the rest of the team took over.”

The sole player remaining from the 2004 championship team, Ortiz’s heroics helped cement his reputation as one of the greatest World Series hitters of all time. “We have a lot of players with heart. We probably don’t have the talent that we had in ’07 and ’04, but we have guys that are capable (of staying) focused and (doing) the little things,” Ortiz said. “When we started rolling, nobody ever stopped the train.

Despite winning two games, the Cardinals bats were maddeningly silent most of the series, especially in key situations when they needed it most. The Cards’ batters consistently failed to get runners on and when they did, they just couldn’t come up with the big hit to drive them in. As well, their vaunted star pitcher Adam Wainright failed to get the job done in his two series starts.

When Ortiz was asked after the game what it meant to have his third World Series title, the 37-year-old responded: “That means I’m getting old.”

ALSO ON EVERYTHINGZOOMER:
Baseball to use replay? Say it ain’t so!