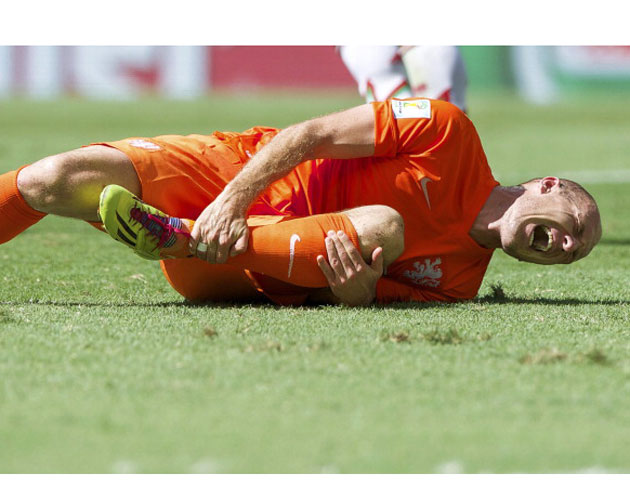 While fans of most sports scorn athletes who dive to draw penalties, in World Cup soccer it’s become an accepted – even celebrated – art form.

In fact, the very first game of the 2014 World Cup between Brazil and Croatia was decided by a ridiculous dive and the number of players flopping, grabbing their shins and rolling around on the grass in an effort to draw penalties has become even worse as the tournament moves on to its Round of 8.

You may remember that first match when Brazilian striker Fred, lurking in the penalty area, felt a Croatian defender’s hand lightly rest on his shoulder. Down went Fred, as if hit by a sledgehammer, his arms waving to the umpire who didn’t hesitate: he called a penalty on Croatia that was easily converted and Brasil went on to win the match.

Those of us wired for hockey were aghast at such unsportsmanlike play. Frequent divers in hockey draw the scorn of fans and, after getting away with a few flops, are basically ignored by referees or even penalized for embellishing. The call in the Brazil game was a complete fiasco that cried out for vengeance.

But soccer fans didn’t seem overly perturbed by the shady practice, some even applauded Fred for a sagacious move. The players don’t appear to feel any sense of shame, perhaps because their ability to draw a flopping foul is a VERY important part of a team’s in-game strategy. Throughout any given match, a referee is forced to make 20 or so split-second judgment calls on what’s a foul and what’s a charade. Without the benefit of replay, he’s going to be wrong on at least half of them.

While watching these divas flop does liven up a game, it becomes frustrating when their subterfuge decides the outcome. World-renowned Dutch diver Arjen Robben, captain of the Netherlands, drew a highly dubious penalty late in the Round-of-16 game against Mexico. The Netherlands scored on the ensuing kick, sending them on to the next round, much to the chagrin of an angry Mexican side. In his post game press conference, Robben had the gall to admit that he took a dive to draw a penalty, though denied doing it on the eventual deciding call.

So should those of us who follow the game only at World Cup time be outraged every time a diver is rewarded? Try to get used to it, it’s fact of life in the sometimes bewildering soccer world, much like: random game clocks, one-named superstars, racist chants, fireworks exploding on the pitch, referees using shaving cream to mark off penalties, players wearing hair accessories and teammates constantly screaming and gesturing at each other.

Yes, this all takes some getting used to, especially those of us attuned to North American sports. Those who simply can’t abide it should take heart and be thankful that this kind of nonsense only happens once every four years.