THE 5 BIG QUESTIONS FROM THIS WEEK IN SPORTS 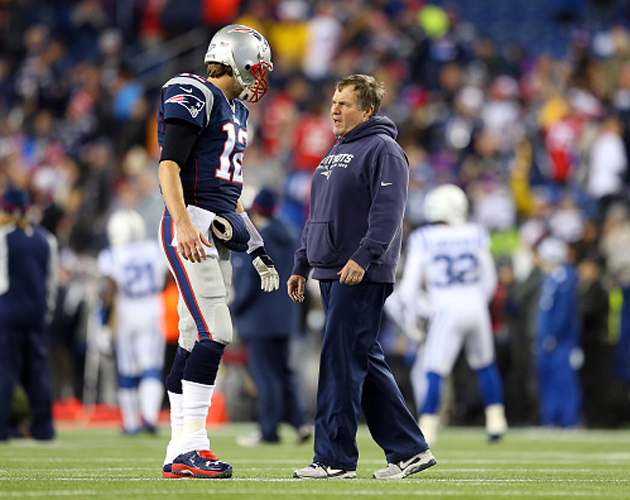 Because it’s a slow time in all sports, we’ll use the opportunity to add our own hot air to the ridiculous Deflategate Scandal. And if Rosie O’Donnell can have an opinion on poorly-pumped footballs, surely we can too.

The New England Patriots – particularly coach Bill Belichick and quarterback Tom Brady – have been accused of purposely deflating the footballs used in their 45-7 win over the Indianapolis Colts in the AFC Championship game. According to a growing number of truthers, Belichick and Brady received a huge edge by letting the air out of the footballs and should either be fined, suspended or hanged, drawn and quartered.

2. Why is it called Deflategate

Because there’s a well known media rule stating that every scandal – real or imagined – must always be linked back to Richard Nixon’s Watergate. (Remember Canada’s very lame Tunagate scandal?) Interestingly, before this non-issue became a full-on tempest (in a teapot), websites were calling it “Ballghazi” (a reference to the so-called U.S. coverup at the attack on the Libyan embassy). Why did this change?

Some say experts say yes. Former CFL/NFL quarterback Joe Theismann says no. The larger point is that the football’s psi certainly didn’t help New England’s rushing game, which was the real difference in this contest, gouging Indy’s defence for 177 yards and three touchdowns.

But don’t be alarmed – thankfully, our top scientists are hard at work solving this elusive enigma. Even Bill Nye the Science Guy (is he really 60?) chimed in, ruling that the Patriots were guilty of taking the air out of the footballs. ABC News sent its crack reporters to get to the bottom of the issue.

4. There have been a lot of bad jokes made about deflated balls. What’s the best one you’ve heard?

Dennis Miller: “It’s like an allegory for where the country is at right now. Because if the Patriots have deflated balls, they really are America’s Team.”

Watch the latest video at video.foxnews.com

5. Why do ridiculous people like Rosie O’Donnell feel the need to express their opinions on football-related issues?

Because it’s America! And it’s Super Bowl week! And everyone with an opinion is trying to make his or hers heard above the cascading din! But before we put this whole thing to bed, let’s turn it over to Grantland’s Charles Pierce for his meta-opinion on all the opinions expressed so far.

The whole thing is flatly hilarious. The way you can be sure of this is that the ladies of The View pronounced themselves outraged by the perfidious Patriots on Thursday morning. Rosie O’Donnell wanted them booted from the Super Bowl. (Trolling or insane? Our lines are open.) Moreover, because of the miracle of Twitter, and the fact that we are a nation of infantilized yahoos, everybody in the bunker at Gillette Stadium became aware of what the ladies of The View felt, and many of the assembled press felt compelled to get various New England players’ reactions to Rosie O’Donnell’s commentary. Me? This is what I think: Once a scandal starts being discussed on The View, it stops being a scandal and becomes a sitcom. I think this should be a rule.