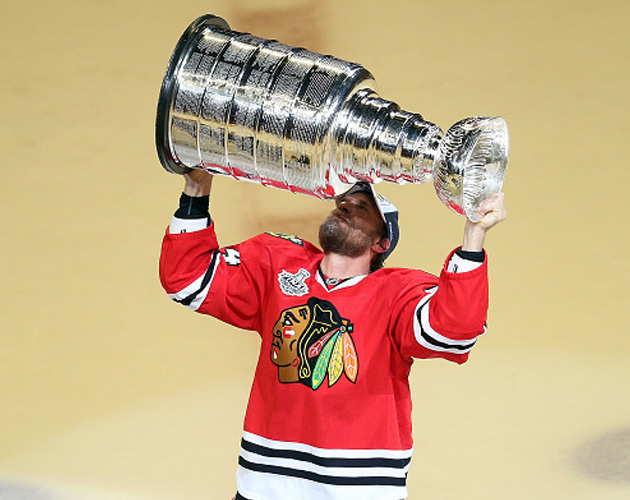 As the seconds ticked down in the Chicago Blackhawks Stanley Cup win over the Tampa Bay Lightning, 40-year-old Kimmo Timonen was having trouble fighting back the tears.

After 16 seasons, 1,108 games and 105 playoff games, the crafty, smooth-skating Finn was overcome with emotion, realizing he’d end his career on the ultimate high note, hoisting his first Stanley Cup in his very last professional hockey game.

Blackhawk captain John Toews took the first lap with the Cup, graciously handed it off to Timonen, who had put in all those years and fought back from injury that almost ended his career to get his one last chance at hockey’s holy grail.

“I didn’t know what to do with it,” Timonen told NHL.com, after receiving the Cup from Toews, who’s already won it three times before the age of 27. “I didn’t know you could go around the rink with it. It was my first time.”

After his brief lap with the trophy, Timonen reflected on the fabulous ending to his career. And it almost didn’t happen. His career was almost ended when he was diagnosed with blood clots in his lungs in August. But he played himself into shape throughout the year and when the playoffs came around, though his role was much reduced, he made the most of his opportunity.

“Where I left in August and I’m standing here, it’s crazy. It’s crazy what I went through. There’s a risk involved obviously, but I wanted to do it. It was totally up to me and I wanted to take that chance, to have one more chance.”

“I played this game a long time and battled hard for years. I’ve been on the losing side of the story so many times that I know guys realize that. They know that I’m going to retire. This was my last game, my last time with skates on.”

While Timonen won his first Stanley Cup last night, Scotty Bowman, Blackhawks senior advisor for hockey operations, celebrated his 14th, nine as a coach (five with the Montreal Canadiens, one with the Pittsburgh Penguins and three with the Detroit Red Wings) and five as a team executive (with the Red Wings and Blackhawks). The 81-year-old, who remains one of the sharpest minds in the game, shows no sign of quitting. And with his son Stan (named after the Stanley Cup, of course) firmly entrenched as the Hawks general manager, it’s even possible he’ll win a few more.