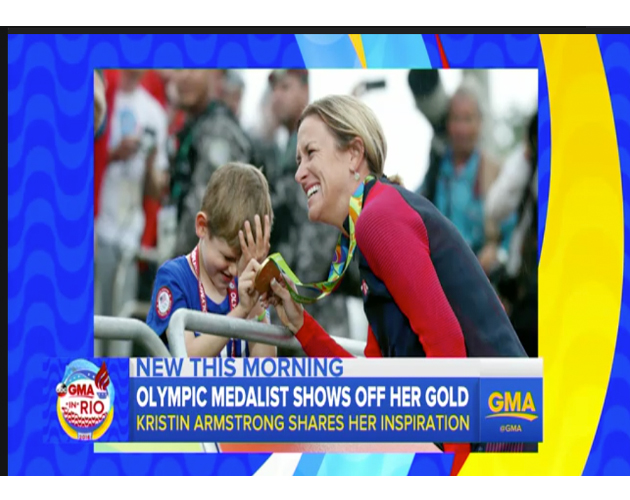 The American cyclist, who just turned 43 yesterday (August 11), won her third consecutive gold medal in the women’s individual cycling event in Rio on August 10. Fending off rain, a bloody nose and a difficult Russian competitor, Armstrong finished the 18.5 metre race with a time of 44 minutes, 26.42 seconds.

After collapsing in an exhausted heap at the finish line, Armstrong was photographed embracing her five-year-old son—a touching image now ingrained in the minds of people across the globe.

With this latest win, she’s now the only cyclist—female or male—to win three back-to-back gold medals in the same discipline.

And to think, some people told Armstrong she’s too old to compete at this level. When asked why she’s still racing despite her age and several hip operations, her simple response was “because I can.”

If Armstrong had actually listened to all those naysayers she would have had to give up on her Olympic dream years ago, well before her 43rd birthday. At 27, the cyclist was diagnosed with osteoarthritis in both hips.

Now, despite her diagnosis and her age, she’s challenging preconceptions left, right, and centre about what it takes to be an all-star athlete.

As she told reporters, “I think that for so long we’ve been told that we should be finished at a certain age. And I think that there’s a lot of athletes out there that are actually showing that that’s not true.”

When she’s not tackling tough, younger opponents on the course, she’s the director of community health at St. Luke’s Hospital in Boise, Idaho. Apparently, she does it all: working, training, raising a kid—and winning gold medals.