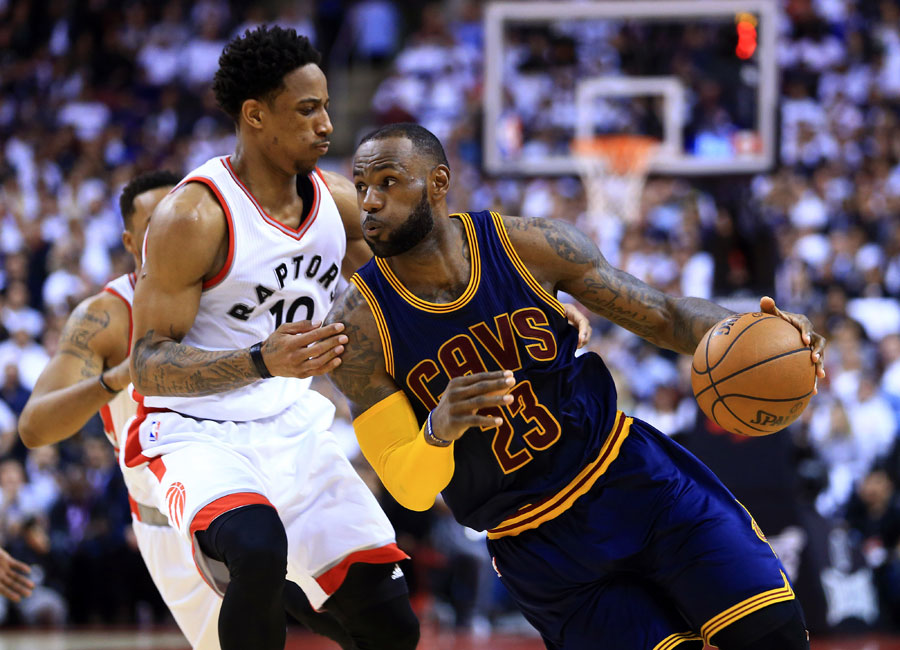 LeBron may have been tired a couple of days ago, but if the Raptors are going to boot LeBron James from the playoffs this year they’ll have to do it by committee.

The tables have certainly turned. As an exhausted LeBron James sat on the bench eating handfuls of tangerine wedges to remedy a bout of muscle cramps that kept him out of the final minute of the third quarter and the beginning of the fourth in his game 7 victory against the Indiana Pacers on Sunday, the Raptors watched the game together comfortably from Toronto, having already dispatched the Washington Wizards, their first-round opponent, in six games.

Last season, it was the Cleveland Cavaliers who had more than 2 weeks of rest, with plenty of time to break down their potential second round matchup with the Toronto Raptors.

In a post game interview immediately following the game 7 victory, LeBron made no attempt at concealing how tired and unprepared he was for his matchup with Toronto on Tuesday. “I’m burnt right now,” James said. “I’m not thinking about Toronto right now until [Monday]. I’m ready to go home. Can we? I’m tired. I want to go home.”

While Toronto will take any advantage they can get over the player that put an end to their last two playoff runs, they shouldn’t let the idea of a tired LeBron James leak into their psyche.

Instead, the Raptors will need to rely on their depth and new style of play to wear down James and take advantage of his less talented supporting cast.

1. Stick to the new offence

Thankfully, the Raptors have made some changes since LeBron and the Cavaliers swept them with ease last year. Nixed from the offence this season was the one-on-one isolation style basketball that made the Raptors so easy to defend in their last two meeting with LeBron.

Despite concerns that they would revert back to hero ball in the playoffs, for the most part the Raptors have stayed committed to the ball movement that put them at the top of the east this season.

The Raptors don’t need to compete with the star power that is LeBron James this time around. Instead, the Raptors need to stay committed to their new style of play and attack the throne on multiple fronts.

Ignoring the warnings from NBA analysts that he would need to shorten his bench in the playoffs, Dwayne Casey continued to play his second unit for extensive minutes in the first round.

However, the Washington Wizards didn’t get a full taste of the Raptors’ bench until Fred VanVleet, who’s known as the floor general of the second unit, made his return in game 6. For the first few minutes of the fourth quarter, the Raptors’ Allstar backcourt of Lowry and DeRozan watched from the bench as the second unit built them a lead, scoring the first 15 points of the quarter.

As expected, the Cleveland Cavaliers relied heavily on LeBron James in the first round where he averaged 41.1 minutes a game, nearly four minutes more than DeMar DeRozan.

Although he admitted he was exhausted after game 7 of his first round series, his high usage didn’t seem to have an affect on his production as he averaged an NBA best 34.4 points in round one.

The Raptors will need to push the pace on offence and keep a rotation of fresh bodies on LeBron James if they hope to slow him on offence.

In addition to a predictable offence, the Raptors’ post-season last year was marred by personnel issues.

Patrick Patterson, who had been a three-point threat in the past, all but forgot how to shoot in the playoffs, while back up point guard Cory Joseph’s shoot-first mentality bogged down the offence.

P.J. Tucker, who was meant to shoot threes and play defence, only did the latter consistently, missing plenty of open threes in the post-season last year.
So after shipping them out in the off season, the Raptors signed C.J. Miles, the first three-point specialist the franchise has seen since Jason Kapono.

However, unlike other sharp shooters, his offence isn’t limited to catch-and-shoot sequences. His propensity for making three-point shots off the bounce, on the move or under duress make him a clear asset in the playoffs and give the Raptors something they haven’t had in previous meeting with the Cavs.

Dwayne Casey needs to put the sharp shooter on the floor with DeRozan and Lowry, where he’s been most affective this season. His presence on the floor will also create more space for the two stars to operate.

Unfortunately, they’ll have to hide him on defence and pray he doesn’t get caught on a switch with LeBron James.

It’s impossible to match LeBron’s size and athleticism but the Raptors do have a couple of players that could slow him down.

In the two wins against the Cleveland Cavaliers in the 2016 Eastern Conference Finals, it was power forward Bismack Biyombo’s defence against LeBron James that seemed to be the most effective. It was also that series that inflated the big man’s worth to the point that the Raptors couldn’t afford him the following season.

Thankfully, Pascal Siakam, a power forward with similar size and mobility, has emerged as one of Toronto’s best perimeter defenders. With his length, quickness and size he should be a tough defensive matchup to throw LeBron’s way.

Toronto’s rookie small-forward OG Anunoby is also a viable option. His 6-foot-8, 232-pound frame and wingspan of 7-foot-2 isn’t wasted on the defensive end. Despite being a rookie, Anunoby has proven to be a savvy defender in the regular season and in the first round against John Wall and matches up with Lebron’s athleticism and size better than any of the other small forwards on the Raptors.

5. Exploit them at the point

The last time the Raptors had depth at the point guard position was in 2008, when fan favourite Jose Calderone backed up T.J. Ford — both of whom could be exploited on the defensive end.

However, this season’s point guard trio offers plenty of upside on both ends of the floor.

Headed into the second round, Kyle Lowry’s three-point shooting looks to be right where it needs to be. And while he’s not the quickest individual defender, he’s known for drawing charges at pivotal moments, earning his team extra possessions, which are so hard to come by in the playoffs.

Lowry’s backup, Fred VanVleet, has emerged as one of Toronto’s best three point shooters this season and despite standing only 5 foot 11 — small by NBA standards — he’s an extremely pesky defender. Like Lowry, he has a knack for scoring in the paint and creates plenty of opportunities for his teammates with his playmaking ability.

Delon Wright offers yet another look at the point guard position. His size and crafty footwork in the paint can pose issues for smaller point guards, while his length and quickness can be utilized for difficult defensive assignments.

The Raptors’ three-headed monster at the point guard position should give the Cavs plenty of trouble. When Cleveland’s starting point guard George Hill needs a rest, they’ll turn to former Raptor and veteran point guard José Calderón, who had difficulty guarding his position even in his younger years with Toronto.

As much as it will pain those Toronto faithful who still hold a torch for the fan favourite, the Raptors point guards will gladly exploit him on the defensive end.

If Cleveland decides to put LeBron at the point guard position as they did in their recent game 7 against Indiana, less mobile players like JR Smith and Kyle Korver can be exploited by the Raptors’ quicker point guards, who Dwayne Casey likes to put on the floor together at times.

6. Deploy the brigade of bigs

The Raptors also have a plethora of big men, each of whom offers a unique skill set.

Starting center Jonas Valančiūnas, who offers the rim protection and dominance near the basket typical of the traditional centre, added a three point threat to his game and has improved his perimeter defence.

His front-court mate Serge Ibalka, who earned the nick name “Iblocka” while playing for Oklahoma City, has certainly lived up to his reputation as a rim protector in his short time with the Raptors. If he finds consistency with his shooting in the playoffs, he can be an X-factor for the Raptor.

The Raptors’ starting big men will be responsible for neutralizing a crucial part of the Cavs offence in defending Kevin Love. If either Valančiūnas or Serge Ibalka has difficulty closing out on Kevin Love at the three point line when James drives to the rim, Dwayne Casey will need to be quick about his in game adjustments. Pascal Siakam and Jakob Poeltl will be viable options off the bench if he’s looking for increased mobility without sacrificing size in that matchup.

The pair also offers plenty of upside on offence. Although his jumper is a work in progress, Siakam is arguably one of the best in the league at running the break and is a very capable finisher at the rim.

Poeltl can catch and finish around the rim with the best of them and his offensive rebounding is invaluable but his biggest upside comes on the defensive end. The 7-foot center is the Raptors’ top shot blocker and is surprisingly mobile for his size.

If that’s not enough, the Raptors have yet another 7-foot center in Lucas Nogueira who, with his ridiculous length, can change shots at will.

As it applies to LeBron, he’ll meet a tall order of resistance on his drives to the basket.