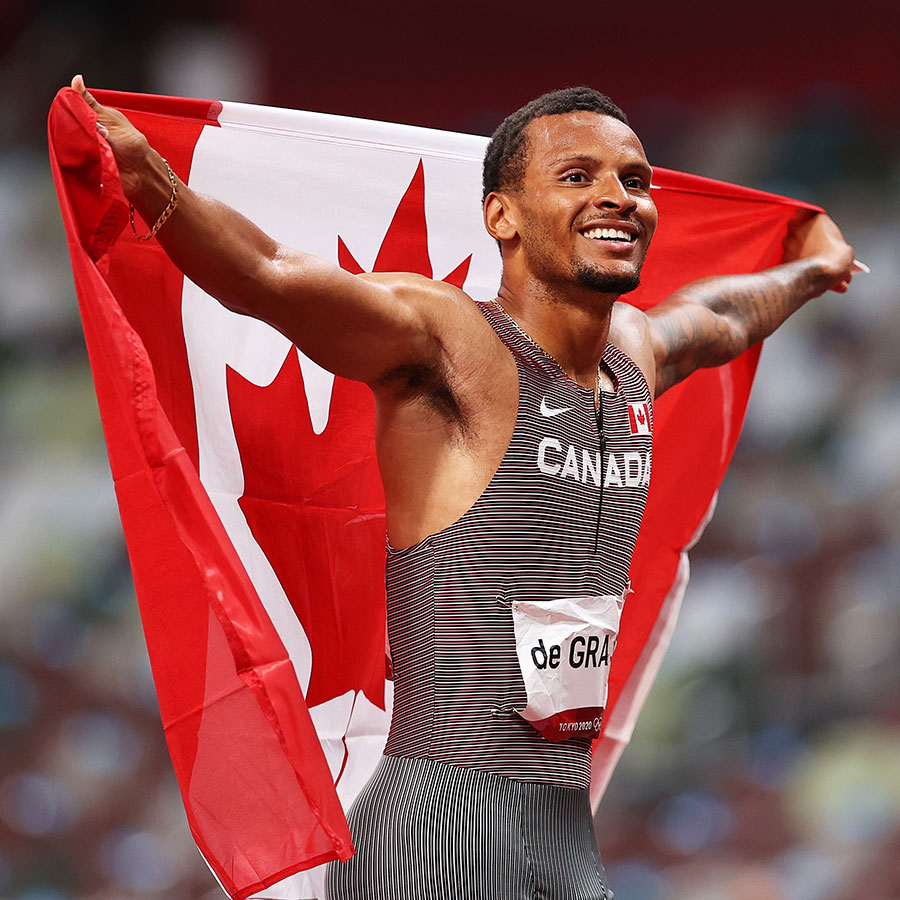 Andre De Grasse’s thrilling gold medal victory in the men’s 200-metre final at the Tokyo Summer Games not only boosted what’s been a disappointing performance by the male Canadian Olympians, but has also vaulted him into the conversation as this country’s top sprinter.

The 26-year-old Markham, Ont., native defeated American Kenny Bednarek today, becoming the first Canadian man to win gold in the 200-metre race since Percy Williams did it in 1928. De Grasse remains the only male to win medals of any colour at these Olympics. He won bronze in the 100-metre race on Sunday — the same result he achieved at the 2016 Games.

In catching and passing the American just before the line, De Grasse ran what he called the “race of his life,” a personal best time (and Canadian record time) of 19:62, winning by just 0.06 seconds over Bednarek. Teammate Aaron Brown finished sixth in the race — the first time ever that two Canadians had qualified for the final.

Kneeling on the track in the empty stadium, draped in the Canadian flag, De Grasse was likely contemplating his momentous breakthrough victory.

The talented young runner, anointed by the greatest Olympian sprinter, Usain Bolt, as his heir apparent at the Rio Olympics in 2016, had finally lived up to his billing and captured the elusive gold.

With his gold in Tokyo, and the enormous burden of expectations off his back,  De Grasse expressed pride and relief at finally climbing to the top of the podium. “This was the race of my life. When I looked at the scoreboard, the camera was on me and I knew I had done it. I’m just so proud,” he told reporters immediately after the race. “I’ve been waiting for this moment, I’ve been training hard for this moment. Felt good to finally get that out of the way.”

“Welcome to the club,” tweeted legendary Canadian sprinter Donovan Bailey, who won two memorable Olympic golds at the 1996 Games in Atlanta, finishing first in the men’s 100 metre and the 4X100 relay, 25 years ago to the day.

The fact that De Grasse won Canada’s first individual track gold medal since Bailey’s magical 1996 run in Atlanta will ignite the intriguing argument of who is the best Canadian Olympic sprinter of all time.

Bailey’s gold in Atlanta was a singular moment in our Olympic history, coming as it did in the shadow of former sprinter Ben Johnson’s dispiriting steroid scandal. Bailey not only set a world record at his race but he also showed the world that Canadian sprinters could compete on the world stage without cheating. Plus, he claimed his crown on American soil, silencing the raucous “USA” chants on his way to claiming the mantle of “world’s fastest man,” a title U.S. sprinters consider their manifest domain.

While De Grasse’s run in Tokyo could not possibly live up to the theatre that Bailey’s victory produced, we will likely remember him as the better sprinter.

After his win today, he now has five Olympic medals, which ties him for the most won by any Canadian male athlete and only two short of swimmer Penny Oleksiak’s astonishing total of seven, that she set earlier in the Tokyo Games. Bailey only ran in one Olympics — he withdrew from the 2000 Sydney Games after contracting pneumonia. If De Grasse maintains his health and dedication to training, he will likely compete in three years at the Paris Olympics.

Talent and medals aside, there’s the matter of personality. Of the two sprinters, Bailey brims with confidence and charisma, which hasn’t waned one bit in the quarter century since his victory. “I was never going to lose the race,” he recently said in a CBC-produced oral history of his run for the ages. “I was the reigning world champion and my confidence was at a different level.”

Bailey hasn’t stopped talking or posting on social media about his race. And seldom fails to note that his clocking of 9:84 in the 100 metre has never been topped by anyone wearing a maple leaf, thus making him the fastest Canadian ever.

De Grasse’s confidence, on the other hand, is more of the quiet variety (although he made quite the brash statement running his race sporting those futuristic-looking Oakley “Xeus” wraparounds.) He’s more diffident in the media spotlight than Bailey and seems quite content to let his accomplishments do the talking.

But his growing medal haul certainly speaks volumes on his behalf. He’s an intensely proud man but doesn’t wear it on his sleeve, like other sprinters. In a charming moment after the race, he gave a shout-out to his wife Nia Ali (a U.S.-born track star who captured silver in the 100m hurdles at the 2016 games) and children. “I’ll see you soon. I love you guys. I can’t believe it. Oh my God. I did it!”

For sheer drama, Bailey’s run was inarguably one of the greatest moments in Canadian sporting history. It was a most incredibly gripping 10 seconds and anyone who watched it will never forget his final burst through the tape. For pure unadulterated sporting joy, it ranks right up there with Paul Henderson’s goal against the Russians in 1972, or Joe Carter’s World Series-winning homer in 1993.

But in 20 years, when we look back and compare the career accomplishments of these two track superstars, it’s De Grasse who will stand out for a sustained level of brilliance over a number of years that Bailey simply can’t match.

We’ll leave it to history to decide the debate of who’s the better sprinter. Right now, let’s sit back and enjoy the fact that a Canadian is on top of the sprinting world again.

Olympic Longevity: Meet 9 Tokyo 2020 Athletes Over 40 Who Are Proving that Age is No Barrier To Success