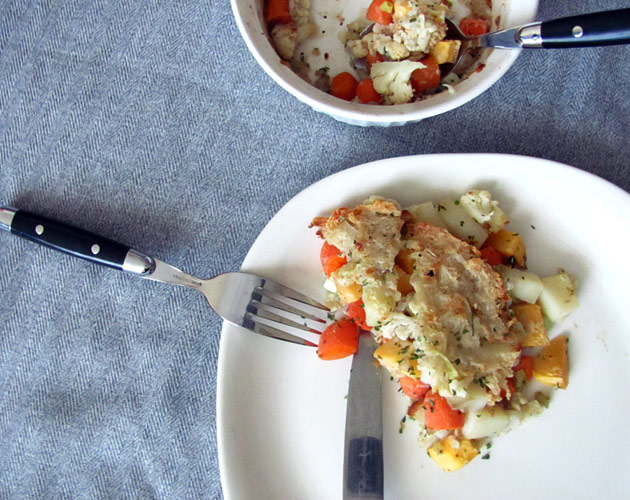 This wartime dish is a meat-free version of shepherd’s pie that’s budget-friendly and easy to make.

Woolton Pie, is a wartime vegetable dish named after Lord Woolton, England’s Minister of Food during the Second World War.  Due to the war, strict rations were placed on the public with meat being one of the scarcest of ingredients. With hopes of making the pie seem more appealing to the war-weary public, the chef at London’s Savoy Hotel was employed to create the dish. Woolton pie was promoted as a way for housewives to feed their families by using leftover vegetables.

The pie consists of four main ingredients, most importantly carrots (as they were plentiful, especially to those who lived on farms who often grew them for animal feed), potatoes, cauliflower and rutabaga (also known as swede).

There are many variations on this dish using a variety of root vegetables. You may also omit the oatmeal and thicken the vegetable water with a bit of flour and butter instead. Some cooks like to add butter to the mashed potatoes as well, and top with decadent handfuls of cheese. This dish is like a meat-free version of a shepherd’s pie—and it’s quite a good budget-friendly meal despite its modest beginnings.

1. Chop up vegetables and cook all together in a pot of water until just tender. Add in the oatmeal and stir occasionally to prevent the mixture from sticking.

2. Allow to cool. Transfer to a pie or casserole dish, and sprinkle with chopped parsley. Cover with a crust of mashed potatoes, or pie pastry.

3. Bake in a 375 degree oven until the pastry is nicely browned.