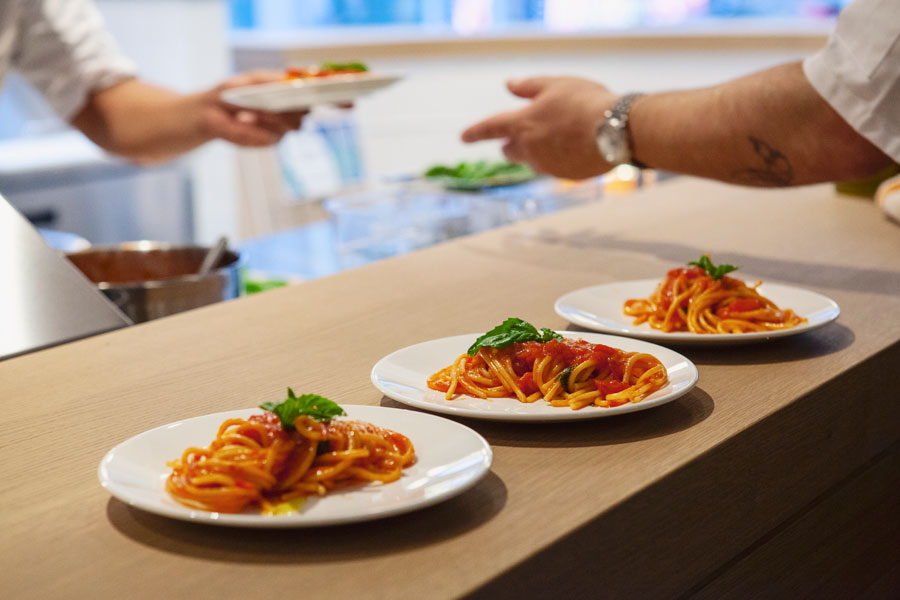 The first time I  experienced Eataly was in New York City in 2012. I was there for work and travelling on my own and very hungry. I had heard a lot about this new concept in grocery store-meets-restaurant-meets-take out bar-meets experimental foodie lab, dedicated to all things Italian, created by Italians.

As I roamed the aisles and took in the colourful packaging while inhaling the aromas of food cooking, I felt a little like Alice in a culinary wonderland. Funny, though, I wasn’t big on carbs, and pizza, pasta and breads are the staples of the Eataly offerings.

But then I saw it. A sign above an open kitchen that said, “Le Verdure,” or vegetables in Italian. I’m not a vegetarian, but it appealed to me to investigate what exactly these Italians would do with verdura. The special of the day? Half a roasted cauliflower. Wait. What? Just cauliflower? Piqued, I bellied up to the bar, where everyone sits, watching the chefs prepare the goods, and picked my spot.

I had what I realize now, almost eight years later, a “woke” foodie moment. In this adopt-a-more-plant-based-diet era, roasted cauliflower is pretty much a mainstay – and on many a menu, a main course. It was crunchy and flavourful and even looked good. And as I noted the other diners around me, I realized we were all solo, yet engaged with kitchen and the chefs and even talking to each other. Dining alone? Eataly made it cool and completely accessible. Woke moment No. 1.

The second time I experienced Eataly was at its Northern Italy home base, in Turin, where it all started in 2007. Eataly founder Oscar Farinetti had one very simple thing in mind: a one-stop shop where people can gather to eat, to shop and to learn about all things Italian, especially food. There I had “woke” moment No. 2 standing at the gelato counter, waiting for three people ahead of me to put in their orders. None of them were Italian; we were all from somewhere else, sharing a moment over an appreciation for Italian food.

“Good food brings us all together,” Nicola Farinetti, Oscar’s son, and the CEO of Eataly North America, tells me when I meet him at the preview for Eataly Toronto, which opens its doors Nov. 13. “It gives us a common point of view.”

The Toronto origin story, he says, was organic. “We were meeting with some of our partners to talk about Eataly London here in Toronto, with Galen Weston (of Loblaws, Holt Renfrew and Selfridges fame), who also has properties in England, and suddenly we thought, wait, why not Toronto?” The partnership was complete. “So, here we are,” notes Farinetti, “opening Toronto, and London isn’t even open yet!”

The 50,000-square foot space, spread over three floors in Toronto’s Manulife Centre at the corner of Bay and Bloor Streets, has almost 400 seats and includes three restaurants (a fourth, Trattoria Milano, will open soon on the main floor), seven eateries, three bars, a cooking school and an in-house brewery in partnership with Toronto’s Indie Alehouse Brewing Co.

Here are some highlights:

Eataly couldn’t bring its high-concept market with an open-air feel to Toronto without Canadian suppliers. All the fish served in its restaurants and sold at Il Pescheria on the second floor is sourced from Scarborough, Ont., stalwart Diana’s Seafood, while the delectable gelato — maple and pistachio among other flavours — is made from milk from Ontario’s Sheldon Creek Dairy, although dairy-free sorbetto is also on offer. The butcher shop, La Macelleria, features hormone- and drug-free VG Meats from Simcoe, Ont., and beef from P.E.I. farmers. In addition to a wall of Parmigiano Reggiano wheels, you’ll find cured meats from Seed to Sausage in Newmarket, Ont., and cheese from Aux Terroirs in Montreal.

Don’t miss the Calvisius caviar, which comes from white sturgeon raised on 150 acres of freshwater ponds in the middle of the Po Valley, the tiramisu made from Eataly USA head pastry chef Katia Delogu’s mother’s recipe, filled-to-order traditional Sicilian cannoli and the olive oil tasting bar. The marketplace sells all kinds of dried pasta, canned tomatoes and, since it’s nearing Christmas, pyramids of panettone.

The bread, with its crispy exterior and toothsome innards, is made from a Peimonte mother yeast and organic, stone-ground Italian flour and baked in an oven shipped from Spain and built on site. The Neopolitan pizza is baked in two impressive, gold-mosaic-covered ovens for 90 seconds.