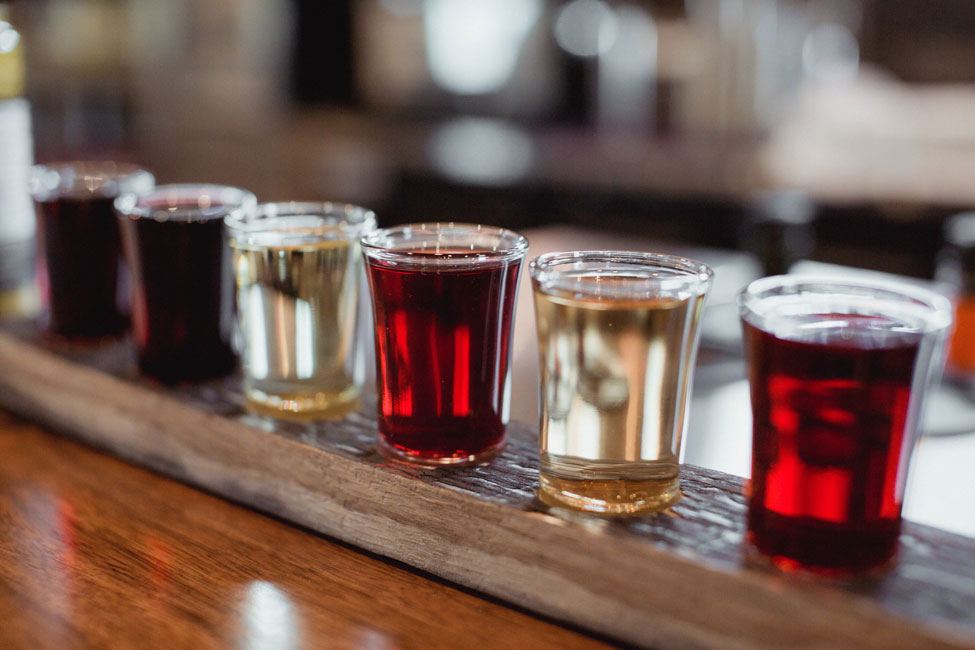 Beer is increasingly finding its place on the gourmet dinner table. Photo by Court Cook on Unsplash

When it comes to food pairings, it’s probably safe to say most of us immediately think of wine. But beer – long the tipple of choice for many Canadians – is no longer companion only to burgers, fries and buffalo wings but is increasingly finding its place in a gourmet setting.

If you’re looking to try something a little different this holiday season, give wine a wee break from dinner duty and try these delicious pairings from Michelle Tham, certified cicerone (a.k.a. beer sommelier) and head of education at Labatt Canada. TIP:  One of the easiest ways to bridge flavours is to use beer as an ingredient in the dish. This holiday season, try adding Stella Artois to the brine for your turkey. It’s a great way to enhance the beer pairing and add extra flavour to your meal.

2 large carrots, peeled and cut into 3- to 4-inch sticks

Scatter onions and carrots  on the bottom of a roasting pan that is just large enough to hold the turkey. Rinse and pat turkey dry. Rub all over with butter, including the cavity of the breast. Season generously with salt and pepper. Set turkey, breast side up on vegetables in pan. Sprinkle with sage.

Roast in 325 F oven for approximately 30 minutes per pound or until an instant read thermometer inserted into the thickest part of the roast (not touching the bone) registers at least 165 F and  juices run clear. Periodically baste turkey with the pan juices as it roasts. Let turkey rest for approximately 15 minutes before slicing. Serves 2 to 4. TIP: The distinctive citrus character of Hoegaarden bridges the fruity qualities of the dish, while the peppery spice of the wheat beer provides additional depth for the vegetables.

Marinade: In a large bowl, combine marinade ingredients. Season pork chops with salt and pepper, add to marinade and refrigerate overnight, tossing at least once.

The following day when ready to prepare, remove pork from marinade and pat dry.

Simmer marinade in large saucepan until reduced by two-thirds. Strain and return marinade to saucepan. Add broth and reduce until sauce coats the back of a spoon. Season with salt and pepper.

Prepare grill. Grill pork chops, rotating frequently until desired doneness, about 12 to 14 minutes in total. In large skillet, heat 1 tbsp of the olive oil; add potato slices and cook until lightly browned and set aside. Add remaining olive oil and chopped shallots; cook until tender. Add tomato, season with salt, pepper to taste and simmer briskly until thickened. Add haricots verts and potatoes; heat through. Season again with salt and pepper to taste. Arrange each pork chop on a plate. Add a spoonful of haricots verts salad and drizzle each chop with some of the sauce. TIP: The slight bitterness of Labatt 50 balances out the gravy, fried onion or bacon toppings that might make their way onto your mashed potatoes this holiday season. Labatt 50’s carbonation also helps to cut through the texture of the potatoes, refreshing your palate with each sip.

Place potatoes in a saucepan with enough cold, salted water to cover; bring to a gentle boil. Simmer for approximately 20 minutes or until potatoes are fork-tender. Turn burner off. Drain well and return potatoes to pot for a few minutes to dry.

Mash potatoes slightly with a potato masher. Add milk and butter and continue mashing until potatoes are smooth and fluffy. Mix in salt and pepper to taste. Serves 4. TIP: The caramel and vanilla notes in Budweiser Copper Lager are reflected in the toffee and brown sugar flavours of pumpkin pie. The added intensity in the beer helps to cut through the overall richness of the dessert.

In a large mixing bowl, lightly beat eggs. Beat in pumpkin, brown sugar, salt, cinnamon, ginger, allspice, nutmeg and cream until well blended and smooth. Pour mixture into unbaked pie shell and bake in 425 F oven  for 15 minutes. Reduce temperature to 350 F and continue baking for about 45 minutes longer or until tester inserted in centre comes out slightly wet but relatively clean.