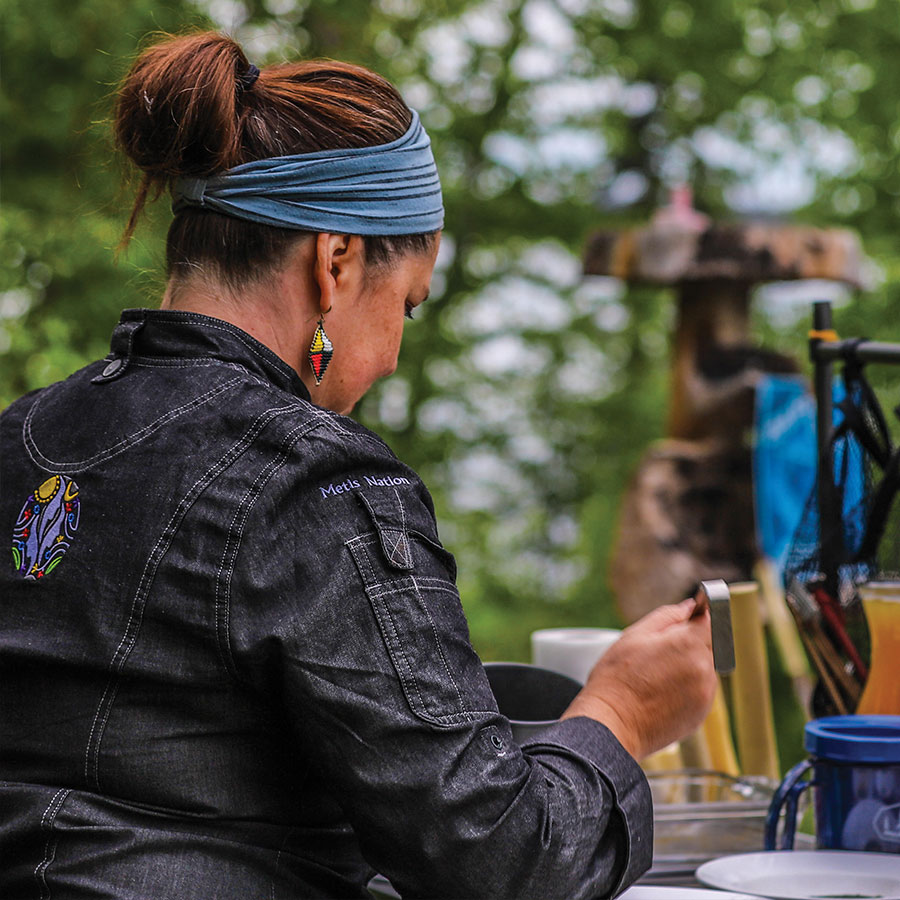 Métis chef Jenni Lessard, seen here working her outdoor cooking setup, is one of the many women bringing Indigenous flavours to the food scene in the Prairies. Photo: Courtesy of Jenni Lessard

When Jenni Lessard was infected with COVID-19 in January, the chef and culinary consultant was devastated when she lost her sense of taste and smell. “When I finally felt well enough to have a backyard fire in February, I stood close to the flames and wafted the smoke into my face, crying with relief at the comforting aroma of birch,” the 46-year-old says, “writing from the heart” in an email from her home in the Qu’Appelle Valley, Sask. The area is also Treaty 4 territory and the homeland of the Métis.

The simple ability to taste and smell, if not as keenly as before, will be the highlight of all Lessard’s outdoor meals this summer. “From my favourite burnt marshmallow to the prairie-grown mustard on a hot dog, I’m savouring them all — bannock roasted on a stick, foil-packet dinners with market-fresh veggies and farmer’s sausage — this is the stuff of al fresco dreams!”

In 2018, Lessard earned the bronze medal at Canada’s Great Kitchen Party, serving up a dish inspired by her Métis heritage. The chef, who is a board member of the Indigenous Culinary of Associated Nations (ICAN), is also the first woman to be named executive chef at the Wanuskewin Heritage Park restaurant, a five-minute drive from Saskatoon. At Wanuskewin, known as a gathering place for the Indigenous peoples of the Northern Plains for thousands of years, archaeologists are discovering evidence of communities that pre-date Egypt’s pyramids. Until November 2020, the award-winning chef cultivated her take on traditional dishes made from the local bison herd, as well as ingredients foraged from the park, such as Saskatoon berries, rosehips and sage. Lessard now acts as Wanuskewin’s Indigenous Culinary Consultant.

The vast Prairie provinces — their bounty and their history, both Indigenous and settler — are the muse for new, up-and-coming leaders of the foodie movement in this part of the country, and the future here is female.

They nurture the earth, build communities to keep traditions alive and, although some work alongside male spouses and business partners, upend gender roles by taking their place at the head of the table.

“Every person and culture can connect with cooking over a fire,” Cindy Lazarenko, 53, tells me by email from Edmonton. Cindy and her brother, Brad Lazarenko, 51, both chefs who are Métis, are the founders of Culina and, although they may be siblings, there’s no rivalry here. They’ve built a small culinary empire that includes three restaurants: Culina, Culina to Go and Culina at the Muttart Conservatory; and Cindy is director of Culina Catering. But why stop there? Brad wrote the curriculum for NorQuest College’s Canadian Indigenous Cooking module, and Cindy teaches it. There she expounds the virtues of local ingredients and shares her knowledge of the foundations of Indigenous cooking.

Cindy and Brad pay homage to their roots through their food, a blending of Indigenous and European flavours. Many of the recipes Brad creates (he’s also executive chef de cuisine of the Culina family of restaurants) include the “Three Sisters” — maize, beans and squash. Integral to the diets of generations of Indigenous peoples, they are the stars of the Indigenous Mondays menus at all three restaurants. In a recent Instagram post, Cindy highlighted the Three Sisters Chowder she cooked up earlier that day for her students. “Corn, squash and beans grow together, support each other and go well together in soups and salads,” she wrote.

Alberta is home to the largest Métis population in Canada and, according to the Métis Crossing cultural interpretive centre in Smoky Lake, it is one of the fastest-growing populations in Canada. Cindy and Brad support the food offerings at the centre, about a 90-minute drive from Edmonton, where Brad is the culinary director.

For Cindy, it’s all about breaking bread in her own backyard. “For us, there is nothing more enjoyable than cooking and connecting with family and friends in the great outdoors with a view of the North Saskatchewan River.”

Running Back to Saskatoon

When Barb Stefanyshyn-Cote, and her husband John Cote, both 56, sold their rural grain farm and embarked on their second act, they had already spent years on their mission to connect people to agriculture. Both are fifth-generation farmers, so it’s in their blood. But they wanted to marry their direct-from-the-soil ingredients with a distillery, and so Black Fox Farm and Distillery was born in 2015 on the 80-acre (32-hectare) farm they bought outside Saskatoon. “It’s all about celebrating connections with the seasons and with each other,” says Barb. Using the farm’s fruits, flowers and grains, the distiller infuses her craft gin, whisky and liqueurs with the terroir of this bucolic setting.

“In the company of warm sunshine and good friends,” she writes, “sipping a refreshing gin tonic filled with summer’s bounty is what memories are made of.”

As leaders of the agricultural community, the couple are also the recipients of the prestigious Nuffield Canada Agriculture Scholarship. It’s a leadership program for those in mid-career that connects top minds in the field with like-minded people around the world and awards individuals who are expected to assume positions of influence in the future.

“My family have been farmers for as far back as I can trace,” says Arlie LaRoche. “Most of them emigrated to Canada from Sweden around the turn of the last century because, as the families grew, there wasn’t enough farmable land to keep everyone fed.” LaRoche has put this born-and-bred knowledge to use as the owner at Farm One Forty in Vanscoy, Sask., a half-hour drive from Saskatoon. She may only be 37, but her holistic management practice is informed by a way of living and farming passed down through generations that was simple and functioned within the confines of nature. Her cattle and lamb are grass-fed and her pigs are pasture-raised, plus, the animals roam as free on the range as conditions allow, which means there is minimal impact on the ecosystem. LaRoche works the farm with her husband Brett, where they live with their two children, but she’s also the brains behind Odla, a farm-to-table restaurant and market in Saskatoon. “Odla is a Swedish word that means ‘to farm,’” says LaRoche, “and is a nod to that Swedish lineage of farmers.”

On a typical day, chef Scott Dicks, 37 – who co-owns the restaurant with LaRoche and manager/sommelier Lacey Sellinger, 36 — walks through LaRoche’s garden to find ingredients for that evening’s meal. “Whether it be tomatoes for salad, fresh peas for a gnocchi, or edible flowers to garnish, there is no shortage of inspiration at Arlie’s farm,” Dicks writes. His favourite part is cooking on an open fire while the guests enjoy a welcome cocktail. “While I’m warming sauces, grilling pork loin, or heating smoked carrots, I get a chance to catch up with people I haven’t seen in a while.”

Pints in the ’Peg

In Winnipeg, the craft beer competition is heating up with the addition of Good Neighbour Brewing Co., a female-owned-and-operated business that opened in May (yes, during the pandemic). But there’s a method to their madness. “Summer is such a momentous time for us for so many reasons,” says Amber Sarraillon, Good Neighbour’s co-founder and brand visionary. “It’s the peak of the beer season, which means we are on the go 24-7,” she writes in an email filled with exclamation points. “It’s a time of the year when people are building memories, spending and sharing time with their family and friends and what better is there to know than that our beers are a part of that?”

Sarraillon’s partner in business and in life is brewmaster Morgan Wielgosz, who began honing her skills at Amsterdam Brewery in Toronto a decade ago, and where the two first connected and realized they had more than beer in common. “We both enjoy new experiences, whether it’s exploring close to home or travelling afar,” Wielgosz says. “And this is where a lot of our recipe inspiration comes from.”

Beer is still a man’s world and Saraillon and Wielgosz recognize they work in a male-dominated industry. “There are also a great number of very talented women here in the Manitoba brewing industry,” notes Sarraillon. “This is what is exciting — seeing diversity grow in the industry!”

I ask Wielgosz what foods she pairs with beer. “Why limit yourself?” she says and, being a good neighbour, proceeds to list some of her favourite haunts. The couple like to pair their Premium Pale Lager with grilled trout from Watersong Farms or pickerel tacos from The Beer Can. On the lighter side, Sarraillon and Wielgosz drink their fruited sour ales with cheese from a shop called The Cheese Mongers Fromagerie. “We set out to create and build a brewery that embodies our core values,” she says. “Inviting. Honest. Genuine. Diverse. Empowered.”

Recipes From the Prairies to Your Table

Created by Barb Stefanyshyn-Cote, distiller at Black Fox, Sask. “Aromatic and refreshing! This cocktail is similar to a Gin and Tonic, but with a few key differences: A balloon glass will help bring the aromatics to your nose. Fill the glass completely with ice. This keeps the cocktail chilled, helps to prevent dilution, and maintains the proper mix-to-alcohol ratio. Aromatics, such as herbs, citrus peels, cucumber, dried flowers, fruits, etc., are added to the glass before the liquids.”

Aromatics of your choice (see Barb’s suggestions above)

Fill balloon glass with ice and add aromatics. Pour in gin and top with tonic. Stir ingredients and enjoy!

Bannock on a Stick

“This is the bannock recipe my great-aunt gave to me just before I opened my restaurant,” says Jenni Lessard. “Now it’s the bannock used at Wanuskewin. It calls for half whole wheat flour and half all-purpose flour, to add more nutrition and a heartier texture. For baked bannock, use 1/2 cup more water and bake in a 12-inch circle on a sheet pan, approximately 35 minutes, until the top is golden brown.”

Mix flour, baking powder, brown sugar and salt in a bowl. Add water and oil and stir just until combined. Knead until all ingredients are combined, adding a bit more flour if necessary. Divide into 20 equal-sized balls. Flatten and form each ball into a 5-inch long portion. Wind around peeled poplar or other wooden stick, pinching shut at top and bottom. Cook over low fire, rotating often, approximately 15 min. until cooked completely inside. Serve with butter and jam!

Salt and pepper to taste

Sauté garlic, leeks, celery, parsnips in olive oil until caramelized. Deglaze with white wine and add can of chopped tomatoes. Add herbs and season with
salt and pepper and chilies. Simmer on low
for an hour.

Meanwhile, slice zucchini into 1/2” (1 cm) pieces and shuck corn. Prepare a barbecue or make a fire for grilling. Toss zucchini, corn and green beans in 1/4 cup canola oil, 2 tbsp soy sauce and 2 tbsp balsamic vinegar. Grill the vegetables for 3-4 min. on each side. Let cool and cut corn off cob, dice zucchini and chop beans. Add to stew and simmer for another 20 min.

A version this article appeared in the August/September 2021 issue with the headline “Boss Ladies: The Prairie Way,” p. 54.

Soaking Up Small Town Nostalgia and Restorative Waters in the Prairies

The Strength of Canadian Indigenous Communities in the Face of Inequality