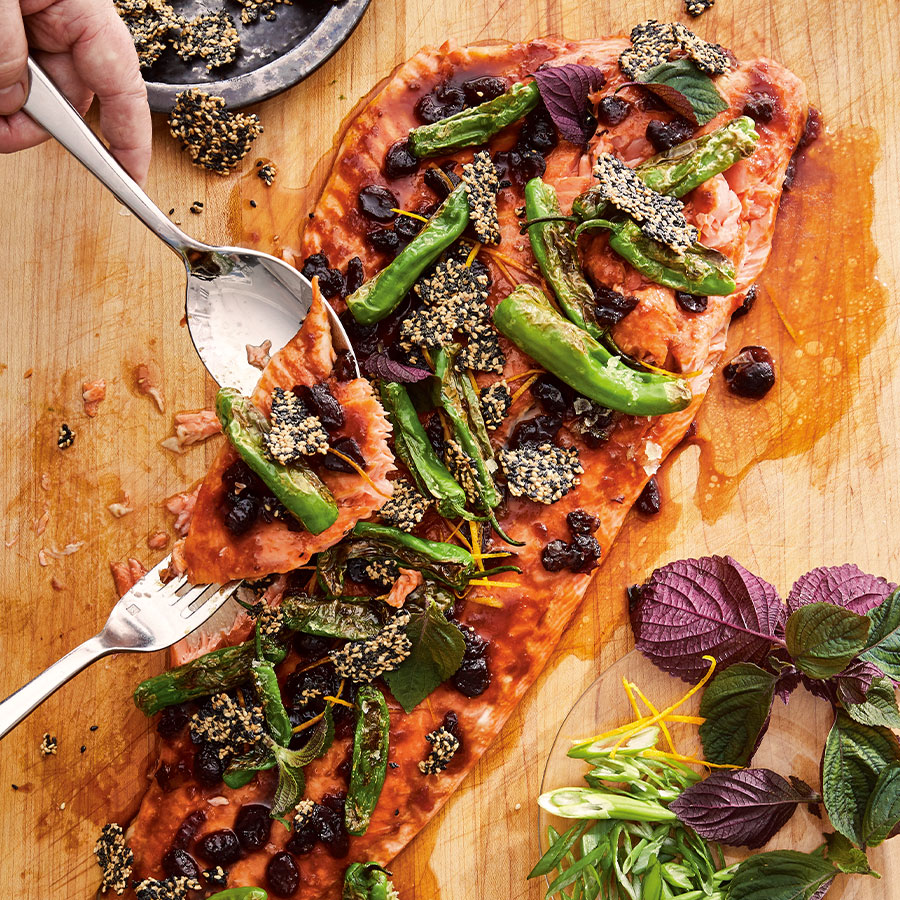 Food is a family affair for Canada’s leading gourmands Lynn Crawford and Lora Kirk. Cranberry Teriyaki Salmon, pictured above, is one of the featured dishes from their cookbook 'Hearth & Home.' Photo: Maya Visnyei

Canadian chefs and spouses Lynn Crawford and Lora Kirk know a thing or two about food as a family affair. After all, it’s what their popular Toronto eatery, Ruby Watchco (which closed its doors in 2020 after a decade of service) was all about: seasonal, farm-to-table meals, with dishes passed family style among diners.

Now, they have joined forces to create the aptly titled, Hearth & Home: Cook, Share and Celebrate Family-Style. The impressive tome features more than 140 comforting recipes for the home chef.

“We were inspired by our friends and family’s requests!” Kirk told Zoomer. “We wanted to share our family favourites. My favourite recipe, today, has to be the Spaghetti Squash Pad Thai.” (Recipe below.) Both Crawford and Kirk have had an impressive career spanning several decades. Over the past 25 years, Crawford honed her culinary chops at such impressive venues as the Four Seasons Hotels in Toronto and New York. She is also a popular TV personality and Food Network star (Wall of Chefs, Iron Chef) and bestselling author of several cookbooks.

For her part, Kirk has worked at the legendary Connaught Hotel in London, England with the multi-Michelin starred chef Gordon Ramsay, as well as stints at the Soho House in New York City and the Four Seasons Hotels in Toronto and Whistler.

If you’re looking for something a little off-the-beaten path for your next culinary creation, here are some main courses from Hearth & Home that are meant for sharing. Or, maybe not.

We do a lot of entertaining at our cottage with friends and family. cooking at the cottage is different from in the city. It is fun, simple and laid-back. No one should have to spend all of their time in the kitchen.

This salmon recipe packs in the wow factor, lakeside or back at home. It is so simple and does not require any lengthy marinating, but is super flavour- ful. The salmon turns out flaky, juicy and delicious with the homemade teri- yaki sauce with cranberries and ginger, and it’s taken up a notch with a nutty sesame seed brittle and blistered shishito peppers.

You can replace the sesame seeds with any toasted nut, coarsely chopped. Almonds are a great replacement.

1. Preheat the oven to 350°F. Line a baking sheet with parchment

2. In a small bowl, whisk the egg white until slightly foamy. Whisk in the sugar, salt, fennel and coriander. Add the sesame seeds and toss to coat. Spoon the sesame mixture in clumps onto the prepared baking sheet and bake, stirring occasionally, until golden brown, 10 to 12 Let cool. Break into small bite-size pieces. Store in an airtight container at room temperature for up to 2 weeks.

In a small saucepan, stir together the ingredients and bring to a boil over medium heat. When the mixture reaches a boil, reduce the heat and simmer until the glaze is thick and shiny, about 4 Let cool.

1. Line a baking sheet with parchment paper. Place the salmon skin side down on the prepared Season with salt and pepper. Spread half of the cranberry teriyaki glaze over the salmon, cover with plastic wrap and marinate in the refrigerator for at least 1 hour or overnight.

2. Preheat the oven to 375°F. Remove the plastic wrap and bake the salmon until flaky and cooked through, 20 to 24 (Bake times will depend on the thickness of the salmon.)

3. While the salmon is baking, bring the remaining glaze to a boil over high When the glaze reaches a boil, reduce the heat and simmer, stirring occasionally, until slightly thickened, about 2 minutes. Remove from the heat.

4. Heat a large skillet over high Add the olive oil and shishito peppers. Toss for 1 to 2 minutes, until starting to blister. Add the garlic, rosemary and thyme and cook for another minute. Remove from the heat. Discard the rosemary and thyme sprigs. Season with sea salt.

5. To serve, transfer the baked salmon to a serving Brush with the remaining glaze, then sprinkle with the sliced green onions, sesame brittle and shishito peppers.

Back when we lived in New York, we would go to Peter Luger Steak House for a juicy steak thickly crusted with freshly crushed peppercorns. Nowadays we eat less red meat, but we wanted to recreate the steakhouse flavours we love with a fabulous meaty vegetable.

For this French-inspired mushroom steak, use the biggest portobello mushrooms (full-grown cremini mushrooms) you can find. This filet mignon of the mushroom world, thanks to its meaty texture and earthy flavour, gets seasoned well with a steak marinade before being roasted, and is served with creamed spinach and a red wine shallot sauce.

1. In a medium bowl, toss the mushroom caps with the steak and everything marinade and let stand for 20 to 30

2. Coat a 13 x 9-inch baking dish with the olive oil. Lay the mushrooms gill side up in a single layer in the baking Spoon any remaining marinade into each mushroom cap. Bake, uncovered, until tender, about 15 minutes. Keep warm.

3. Melt the butter in a large skillet over medium heat. Add the shallot and garlic and cook, stirring, until softened, 2 to 3 Add the cream and cook until reduced by half. Whisk in the goat cheese and spinach. Continue to cook until the spinach wilts and the sauce thickens, about 3 minutes. Stir in the Parmesan and season with salt and pepper. Remove from the heat and keep warm.

1. In a small saucepan, bring the shallots and red wine to a boil and cook until the wine is reduced by half and slightly syrupy, about 5 minutes. Remove from the Whisk in the butter, one piece at a time, to make a glossy sauce. Season to taste with salt and pepper.

2. To serve, arrange the mushroom caps on a serving platter. Evenly divide the creamed spinach over the Sprinkle with the crispy panko breadcrumbs. Serve the stuffed mushrooms with the red wine shallot sauce on the side.

Pot pie is the ultimate cosy comfort food. In this recipe, tender poached cubes of turkey nestle in a rich, thick cream sauce decked out with carrots, potatoes and onions, all topped with our famous cheddar cheese biscuits. The biscuits are perfect on their own and will become an everyday family favourite in your home, too.

1. In a food processor, combine the flour, sugar, baking powder, pepper, baking soda and salt. Pulse to blend. Add the butter and pulse until a fine meal Transfer the mixture to a large bowl. Stir in the cheese. Cover and chill in the refrigerator for at least 20 minutes. The dough can be prepared to this point up to 4 hours ahead.

2. Mix up to 1 cup of buttermilk into the dough to bind Turn the dough out onto a floured surface and knead gently until combined, about 10 turns. Using a rolling pin, roll out the dough to ¾-inch thickness. Using a 3-inch cookie cutter, cut out biscuits. Reroll the dough scraps and cut additional biscuits. You should have at least 12 biscuits. (To bake biscuits on their own, preheat the oven to 400°F. Arrange the biscuits on an ungreased baking sheet. Brush with the egg wash. Bake until golden brown and firm to touch, about 18 minutes. Serve warm.)

1. Heat the olive oil in a large skillet over medium-high Add the turkey and season well with salt and pepper. Cook, stirring occasionally, until the turkey is lightly browned on all sides, 4 to 5 minutes total. (The turkey will not be cooked through.) Transfer the turkey to a large bowl.

2. Return the skillet to medium heat and add 2 tablespoons of the butter, the onion, carrots and celery and cook, stirring occasionally, until the onions have softened, about 5 Add the vegetables to the bowl of turkey.

3. In the same skillet, over medium heat, combine the remaining ½ cup butter and the flour. Stir together until mixed well. Slowly whisk in the chicken stock, making sure you whisk well to avoid Bring to a boil, then add the cream, potatoes, thyme and rosemary. Add the turkey and cooked vegetable mixture and any juices from the bowl. Season with salt and pepper and simmer, stirring occasionally, until the potatoes and turkey are cooked, 8 to 10 minutes. Remove the thyme and rosemary. sprigs. Gently ladle the filling into a large casserole dish.

4. Evenly top the filling with 12 biscuit dough rounds. (You will have extra biscuits that can be baked ) Brush the biscuits with the beaten egg and bake until the biscuits are golden and the gravy mixture is bubbling, about 20 minutes. Cool slightly before serving.

Spaghetti squash is insanely fun to eat, no matter your age. Scraping the flesh to create long noodle-like threads is like raking a little garden, but way more satisfying and delicious. Not only is spaghetti squash a fun food, it is loaded with potassium, vitamins C and A and other antioxidants. Adding to the appeal, it is low in calories — about forty calories in one cup cooked — as well as fat, sodium and carbohydrates. This tasty alternative to pasta is also high in fibre to keep you feeling full longer.

Instead of topping the squash with a typical tomato sauce, the sweet, sour, tangy flavours of pad Thai—predominantly from tamarind—heighten this dish in a new and unexpected way. capping it off with crisp bean sprouts, peanuts and cilantro makes it as delectable as the restaurant version we love so much.

2. Add the tamarind date paste, soy sauce, Sriracha sauce and fish sauce and blend until will Strain the sauce through a fine-mesh sieve into a small bowl and set aside.

1. Preheat the oven to 425°F. Line 2 baking sheets with parchment

2. Carefully cut the spaghetti squash in half lengthwise and scoop out and discard the seeds. Place the squash cut side up on a prepared baking Season with salt and pepper, cover with foil and roast until tender, 35 to 40 minutes.

3. Meanwhile, spread the tofu on the second prepared baking Drizzle with 2 tablespoons of the canola oil and season with salt and pepper. Roast until golden brown, about 15 minutes.

4. Heat a large skillet over high Add the remaining 1 tablespoon canola oil, shallots and garlic and cook, stirring frequently, until softened, about 3 minutes. Add the carrots, bell pepper and baked tofu. Cook until the vegetables are tender, another 2 to 3 minutes. Add the spinach and green onions and cook until the spinach begins to wilt, 1 to 2 minutes. Pour 2 tablespoons of the pad Thai sauce into the pan and toss to coat.

5. Using a fork, carefully scoop the squash out of the skin, reserving the Add half of the squash noodles to the pan, toss, and cook for 1 minute. Stir in the remaining noodles and pad Thai sauce. Add the bean sprouts and toss together.

6. To serve, spoon the squash filling into the squash shells and arrange on a serving Garnish with peanuts, cilantro and lime wedges.

Recipes to Give Your Holiday Dinner an International Twist