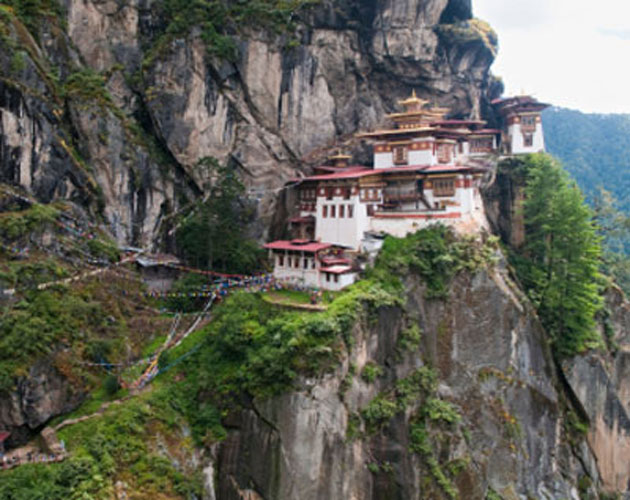 As a correspondent for National Public Radio, Eric Weiner often traveled to war-torn or famine-ravaged countries. To cleanse his spirit, he decided to travel to some of the world’s happiest places to find out just what made them so joyful.

Weiner’s journeys from Iceland to Qatar to Bhutan are described in his book The Geography of Bliss: One Grump’s Search for the Happiest Places in the World. In this article, Weiner tells some of the things he learned.

Happiness Is Taking Pride In Who You Are (Iceland)

If it is possible for language, mere words, to nurture happiness, to tickle the creative soul of an entire people, then surely that language is Icelandic. Icelanders love their language. Love it even more than their country, which is saying something. For Icelanders, language is the tabernacle of the country. That’s what one person here told me. In any other country, I’d dismiss such a statement as nationalistic hyperbole. Not in Iceland.

Happiness Is Knowing Where You Come From (Switzerland)

The Swiss are deeply rooted in place. Their passports list the name of their ancestral town. Not their hometown but the town of their roots. Maybe they weren’t born there. Maybe they’ve never even been there. But it is their home. It’s been said that the Swiss only become Swiss upon leaving the country. Until then, they are Genevans or Zurichers, or otherwise defined by where they happen to come from. No wonder it was the Swiss who invented the modern concept of homesickness; they were the first to put a word, heimweh to that nagging feeling of dislocation, that feeling of loss we experience when uprooted from the place we call home.

Happiness Is Spreading the Wealth to Everyone (Qatar)

Water in Qatar is free. So is electricity and health care and education. The government even pays a small salary to Qatari college students. When a Qatari man gets married, the government gives him a plot of land to build a house, an interest-free mortgage, and, to boot, a monthly allowance of roughly seven thousand dollars. And unlike in European welfare states, Qataris aren’t burdened with high taxes. No income tax. No sales tax. Nothing.

Happiness Is Taking Care of Yourself and Others (Bhutan)

In the last few decades, Bhutan has made tremendous strides in the kind of metrics that people who use words like “metrics” get excited about. Life expectancy has increased from 42 to 64 years. The government now provides free health care and education for all of its citizens. Bhutan is the world’s first nonsmoking nation; the sale of tobacco is banned. There are more monks than soldiers. Every trivia buff who visits the city loves to point out that it is the world’s only capital city without a single stoplight.

Happiness Is Getting to Know You (United Kingdom)

Even in the inebriated atmosphere of a pub, the British remain very economical with their emotions. Personal information is doled out judiciously, like premium chocolate or fine wine. As any economist will tell you, scarcity creates value. So when a Brit opens up, exposes their wounds, where it hurts, this is more valuable, more meaningful, than when an American does it. For the first time since I arrived in Britain, I appreciate the value of reticence.

Happiness Is Other People (Thailand)

What the Thais know instinctively is that a smile, a real smile, is not located in the lips or any other part of the mouth. A real smile is in the eyes. To be precise, the orbicularis oculi muscles that surround each eye. We cannot fool these muscles. They spring to life only for a genuine smile. The Thais remind us that a smile is not private. Researches have found that people, sane people at least, rarely smile when alone. The smile is a social gesture more than a reflection of our inner state, though it can be that, too.

Happiness Is Realizing All Things Are Connected (India)

Hearing and feeling about one thousand people say “om” at the same time is something to behold. The whole room feels as if it is vibrating. I like this, I think, yes, I like this, and it dawns on me how much I associate India with sounds–the singsong call of a street hawking, the bleating horn of an auto-rickshaw, the chanting of a Hindu priest. Every sound, not just the holy ones, is a vibration. And a vibration is, of course, motion. Air pressing against air. Nothing more. Yet this simple act of physics can result in Mozart’s piano concerto or a freeway at rush hour or a lover’s whisper.

Happiness Is In Your Backyard (America)

My passport is tucked into my desk drawer again. I am relearning the pleasures of home. The simple joys of waking up in the same bed every morning. The pleasant realization that familiarity breeds contentment and not only contempt. I am more aware of the corrosive nature of envy and try to squelch it before it grows. I don’t take my failures quite so hard anymore. I see beauty in a dark winter sky. I can appreciate a genuine smile from 20 yards.

Have I found happiness? I still own an obscene number of bags and am prone to debilitating bouts of hypochondria. But I do experience happy moments. I’m learning, as W.H. Auden counseled, to “dance while you can.” He didn’t say dance well, and for that I am grateful.