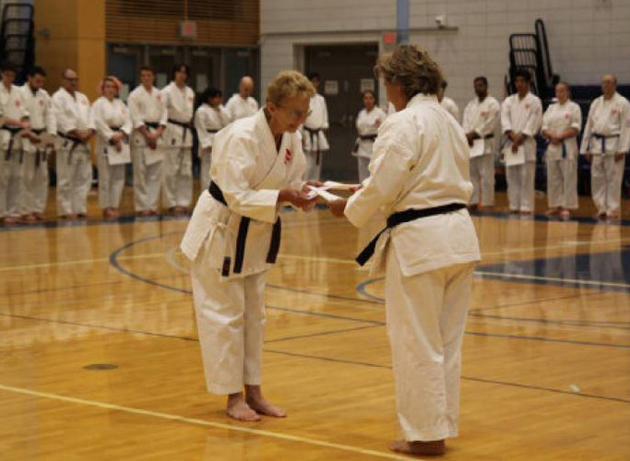 The senior made history this weekend at the Academy of Martial Arts in Mississauga, Ont.

Gloria Smith knows a thing or two about how to fight for survival.

The 72-year-old retired teacher received her black belt in karate on Sunday, making her the oldest person to accomplish this feat in the 28-year history of the Academy of Martial Arts where she trains almost daily.

“They have a saying that your belt is the result. It’s not the goal,” Smith told the Toronto Star.

An avid hiker, Smith didn’t anticipate falling in love with a martial art. In fact, she came into it completely by accident.

Eight years ago, Smith was diagnosed with breast cancer. She underwent both radiation treatment and surgery to fight the disease. But Smith, who also suffers from arthritis, vowed never to let the diagnosis prevent her from staying active.

Following the surgery, she spent the next two years learning tai chi. However, it was karate that caught her eye and, eventually, won her over after she signed up for an eight-week class.

She was instantly hooked.

But it’s one thing to sign up for a little extra exercise—it’s another thing entirely to earn a black belt, the highest belt rank in karate, in under five years…at the age of 72.

So, how did she do it? Total immersion. Smith trained nearly every day, often with people in their 20s and 30s.

“It’s a total way of life,” she told the Star. “You learn discipline, courtesy, respect. I really wanted this journey. The journey was the cake. The black belt was the icing.”

Ian Jay, Smith’s instructor, was in awe of how quickly she took to karate.

“There’s nobody who’s achieved their first-degree black belt in their 70s within our schools, so that’s very rare,” he said. “This was new territory. She’s doing something that no one else has done. The misconception about the martial arts is that it’s only for young people. It has so much to offer people of all ages.”

Smith celebrated her black belt on Sunday with husband Ray and son Mike. However, she’s not done—she plans to continue her training.

“For me, it’s not over. So long as I can still train, I will continue to do so,” she told the Star. “The day I stop learning is the day I start to die.”