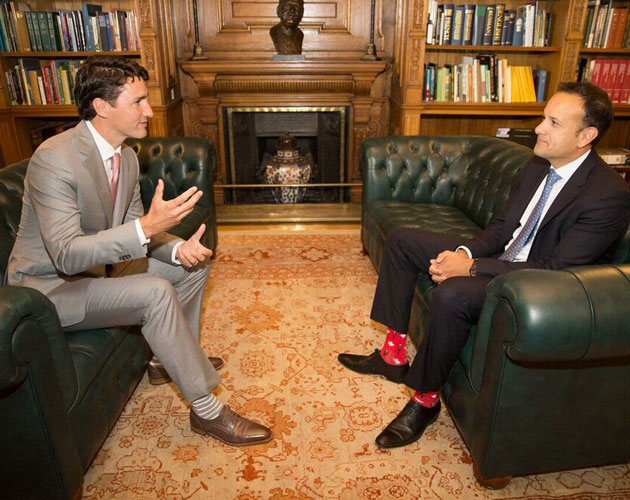 The meeting comes ahead of a G20 summit in Harmburg, Germany that’s expected to be contentious with the Canada-EU free trade deal up for discussion.

The buzz, however, was Varadkar out-besting his Canadian counterpart in the area of sock diplomacy with a pair of red and white dress socks patterned with Mounties and maple leafs. Trudeau—who often makes a political statement with his socks—opted for a subdued pair of grey and white striped dress socks to match his suit.

Possibly in preparation for their next meeting, Varadkar presented Trudeau with a pair of Irish-themed socks, along with a custom soccer jersey.

Our athletic PM also tried his hand at Hurling during his visit—a game of ancient Gaelic and Irish origin. Trudeau will visit Irish President Michael D. Higgins before heading to Edinburgh, Scotland on Wednesday, July 5 where he’ll have a private audience with the Queen at the Palace of Holyroodhouse.