Jagmeet Singh: Unlike Any NDP Leader We’ve Seen Before 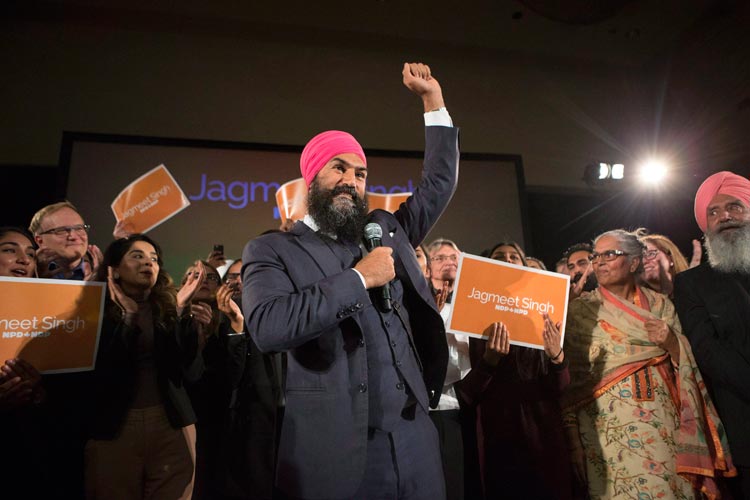 Jagmeet Singh celebrates with supporters after winning the first ballot in the NDP leadership race to be elected the leader of the federal New Democrats in Toronto on Sunday, October 1, 2017. THE CANADIAN PRESS/Chris Young

The NDP’s newly minted leader Jagmeet Singh is young, fun, charismatic, bikes to work, competes in mixed martial arts and, according to Buzzfeed, is the “swaggiest politician in Canada.”

Swaggy or not, he’s a trailblazer for sure – Singh is the first non-white leader of a national party. Replacing the sober technocrat, Tom Mulcair, he gives the NDP a much-need shot of energy, not to mention instant credibility among minorities who, as he pointed out in an interview, don’t often get a chance to “see themselves reflected in government.”

By going in this new direction, the NDP hopes the Toronto-born, St. John’s and Windsor raised criminal defence lawyer can change the party’s fortunes, from a perennial also ran into a national powerhouse.

At 38, he becomes the second youngest national leader; Andrew Scheer is younger by four months, leaving Justin Trudeau the relative greybeard at 45. It also means that the next federal election, set for 2019, will be the first in ages fought without a baby boomer representing any political party.

While Singh brings energy and charisma (his instagram account makes Trudeau seem button-down by comparison) to his new position, he’s a poltical neophyte. After an unsuccessful run at federal politics in 2011, his only political experience comes from winning a seat in the Bramalea-Gore-Malton riding for the Ontario NDP. Now he will have to focus on winning a federal by-election before he can sit in the House of Commons.

While his personality is new and appealing, Singh’s politics are straight-down-the-line NDP: increased taxes on the rich, assisting low-income workers, reducing carbon emissions, and supporting gender rights. Reports suggest he speaks passable French, which should give him a boost in Quebec, a province where he might find it difficult to gain traction.

Bur for now, he can bask in his leadership victory. Soon, he’ll turn his attention to figuring out how he can wrangle left-wing supporters who turned to the Liberal Party in the last election.

So the contenders for the 2019 election are set and they couldn’t be more unalike. It should make for the most thrilling political theatre in years.